"This was a historic night when we felt the full embrace and commitment of the President of the United States. It's simply unprecedented." Those words were spoken by Joe Salmonese, president of the Human Rights Campaign, just after President Barack Obama spoke to the group's 13th annual national dinner.

The Human Rights Campaign is one of the leading organizations promoting what it describes as "lesbian, gay, bisexual and transgender (LGBT) civil rights." The group's annual dinner, held Saturday night, featured well-known politicians and entertainers popular in the LGBT community, as well as an appearance by the President of the United States. President Obama's speech was a matter of controversy long before he arrived. Though pledging soon after his election to be what he called a "fierce advocate" for gay rights, the President has frustrated the gay rights community with what they see as inaction and hesitation in dealing with their agenda.

Indeed, the Obama administration has been under sustained pressure from the gay rights community - a crucial sector of its political support - and the HRC dinner was seen as an opportunity for the President to reassert his identification with gay supporters. Mr. Obama was the second sitting president to appear at an HRC dinner. President Bill Clinton appeared before the group in 1997.

Addressing the group, President Obama spoke of the obstacles in the way of the agenda hoped for by gay activists. The President told the group that they faced a continuing fight, adding: "I'm here with you in that fight."

In the course of his address the President took credit for a federal hate crimes bill that was passed last week by a Democratic majority in the House of Representatives. He also pledged to push for an employee non-discrimination bill and fully-inclusive hate crimes legislation.

But the greatest attention was directed at the military's "Don't Ask, Don't Tell" policy that bars openly-homosexual individuals from serving in the U.S. Armed Forces. "I will end don't ask don't tell," the president pledged. "That's my commitment to you." Nevertheless, the President did not stipulate any timetable for this action - a fact noted by his audience.

The President's perceived lack of action - and his refusal to hold his administration to a timetable for action - meant that many in the crowd were disappointed. Though his speech was repeatedly interrupted by eager applause, a good many activists complained that his speech was politically expedient. At TIME.com, John Cloud summarized the President's message with these words: "I'm with you. But I can't do much for you."

Nevertheless, in contrast to that reading of the President's comments, others understood Mr. Obama to make a sweeping series of promises. In addition to pledging a repeal of the "Don't Ask, Don't Tell" policy, the President also pledged to repeal the Defense of Marriage Act. 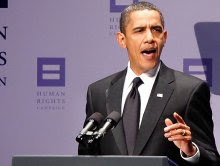 And that is why - that's why I support ensuring that committed gay couples have the same rights and responsibilities afforded to any married couple in this country. I believe strongly in stopping laws designed to take rights away and passing laws that extend equal rights to gay couples. I've required all agencies in the federal government to extend as many federal benefits as possible to LGBT families as the current law allows. And I've called on Congress to repeal the so-called Defense of Marriage Act and to pass the Domestic Partners Benefits and Obligations Act.

The Defense of Marriage Act (DOMA), passed in 1996, stipulates a federal definition of marriage as the union of a man and a woman and protects any state from being forced to recognize a same-sex marriage legal in another state. The law was passed by huge majorities in both houses of Congress and was signed into law by President Bill Clinton. The opposition of the homosexual community to the law has multiplied since the advent of legalized same-sex marriage in a handful of states.

In a significant portion of his address, President Obama spoke of the fact that gay and lesbian concerns "raise a great deal of emotion in this country." He did not counsel the homosexual community to be patient, but he did ask for understanding. He spoke of advances made over the last three decades, but then reflected that "there's still laws to change and there's still hearts to open." Furthermore, "There are still fellow citizens, perhaps neighbors, even loved ones - good and decent people - who hold fast to outworn arguments and old attitudes; who fail to see your families like their families; who would deny you the rights most Americans take for granted. And that's painful and it's heartbreaking."

The President's promises were sweeping. Nevertheless, the most remarkable section of his address included a truly unprecedented promise. The President told the group that his expectation is that when they look back over the years of his administration, they would "see a time in which we put a stop to discrimination against gays and lesbians."

Then he spoke these words:

Those words represent a moral revolution that goes far beyond what any other President has ever promised or articulated. In the span of a single sentence, President Obama put his administration publicly on the line to press, not only for the repeal of the Defense of Marriage Act, but for the recognition that same-sex relationships are "just as real and admirable as relationships between a man and a woman."

It is virtually impossible to imagine a promise more breathtaking in its revolutionary character than this - to normalize same-sex relationships to the extent that they are recognized as being as admirable as heterosexual marriage.

The attendees at the Human Rights Campaign's annual dinner heard the President of the United States make that breathtaking pledge. Was the rest of America listening?

Why Hate Crimes Bill May Be Doomed - FOX News

Thinking Biblically About Homosexuality - Grace to You (John MacArthur)