The Demise of the Dollar

When I first started reporting on the perils facing the dollar, there was little coverage in the major news media about the greenback’s health. Today, concerns about the dollar dominate the financial news.

The dollar has had a brutal week. The dollar fell to a 14-month low against a basket of currencies. Currency traders pushed the euro to $1.481, while the Australian dollar reached 97.93 cents. 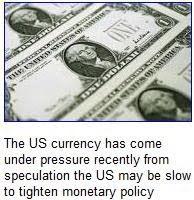 The downward trend in the dollar’s value stems from the endless flow of red ink in Washington. It’s too bad the Nobel Prize committee didn’t award Barack Obama the prize for economics. He certainly didn’t earn the one he received for world peace. If Obama had received the nod for finance, maybe he would feel he needed to earn it by doing something to balance our budget.

We have just spent nearly $2 trillion on the financial crisis, and the storm is not over:

The dollar’s sagging value has caused many to question its status as the world's reserve currency. World Bank President Robert B. Zoellick said that time is running out for the privileged role enjoyed by the American currency. Possible replacements for the dollar are the Japanese yen, the Chinese yuan, the euro, and a new currency being created for members of the Gulf Co-operation Council that includes Saudi Arabia, Kuwait, and Qatar.

"The United States would be mistaken to take for granted the dollar's place as the world's predominant reserve currency," Mr. Zoellick said in a speech to Johns Hopkins University's School for Advanced International Studies in Washington. "Looking forward, there will increasingly be other options to the dollar."

Last week, there was a story in The Independent newspaper about Arab states plotting to drop the dollar. The paper said,

“Secret meetings have already been held by finance ministers and central bank governors in Russia, China, Japan and Brazil to work on the scheme, which will mean that oil will no longer be priced in dollars.”

The report was mostly based on unnamed Arab and Chinese banking sources.

The price of gold hit a fresh record high point above $1,058 an ounce on Thursday. The precious metal is up 21 percent for this year. The run-up in gold has been largely driven by weakness in the dollar.

Another indication of the dollar’s lack of strength is that most other currencies have not yet seen records for the price of gold. A chart of gold in the yen, euro, and Australian dollar for the past couple weeks shows a near-stable price for gold.

High gold prices are the canary in the coal mine for onset of hyper-inflation. When a nation gets itself heavily into debt, there are only two ways out. You have the lender forgive the debt, or you devalue the debt by printing money — which is commonly called inflation. Since we are the one with the reserve currency, debt forgiveness is not an option. Inflation is our only viable choice.

Inflation is not a pain-free cure. If we had 100% inflation, it would cut our debt load in half, but it would also impact the value of people’s dollar holdings.

China, which has the world's largest reserves estimated at nearly $2 trillion, keeps most of its reserves in dollar-denominated securities such as short-term Treasury bills. They would be very unhappy to see their nest egg drop by hundreds of billion of dollars.

America has maintained its living standards by borrowing cheaply and consuming far more than we produce with little consequence for decades. If the dollar should collapse, we would have to get back to the true meaning of trade: You give me something for something. Right now, our key export has been debt in the form of dollars and securities.

I think Satan has been doing his best to get our nation tangled in debt. As the dollar loses value, there is a decrease in our ability to project power around the world.

Terry and I have talked several times about the fate of the dollar, and we both think that the dollar will continue to slowly erode in value ahead of the rapture. We don’t believe that there will be economic chaos at the time Jesus calls us home. Once the rapture occurs, the dollar and the American economy will certainly be toast. This is why it is so important for everyone to make sure he or she is rapture ready.

US gold rises above $1,060 on dollar weakness - Reuters