Jerusalem is at the center of Middle East controversy, the city placed on the proverbial chopping block by the American president and the international community for division in order to bring about a Palestinian state. More than that, it is peace in our time the world leaders say they seek. There is a new prince in this process, and he has, in effect, just been anointed as such by the globalist organization that officially pronounces such commendation.

President Barack Obama was named the 2009 winner of the Nobel Peace Prize this past week. His nomination was actually made nine days into his presidency, then his selection as winner was announced October 8. The decision, made from a record 205 candidates, was unanimous.

Despite his brief time in the international spotlight, Mr. Obama received much glowing praise, such as that from Mohamed ElBaradei, director general of the International Atomic Energy Agency in Vienna, and a former Nobel Peace Prize winner:

"In less than a year in office, he has transformed the way we look at ourselves and the world we live in and rekindled hope for a world at peace with itself," ElBaradei said. "He has shown an unshakable commitment to diplomacy, mutual respect and dialogue as the best means of resolving conflicts" (Joel Rosenberg’s Weblog, 10/9/09).

Obama's being vaulted into the position of chief peacemaker by those who help serve as king-makers before the world's media, thus the eyes and ears of the world, raises many questions — especially in the minds of those who look beyond first-glance meaning. Questions rise to the surface of this anxiety-fraught time. Why has a man of only 48 years of age, who has no accomplishments of any distinction in matters of international peace-making, and little experience in anything else except community organizing in Chicago, and a few hours spent actually working in the U.S. Senate before being elected president of the United States, suddenly been declared the top man of peace by the Nobel committee? 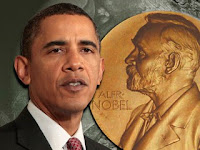 Despite Mohamed ElBaradei's acclamation of Obama's peace-making, there is no such achievement to be found, only claims of achievement.

For example, President Obama met in July with Russian President Dmitry Medvedev in Moscow on nuclear arms control. The leaders agreed that their negotiators would work out a new limit on delivery vehicles for nuclear warheads of between 500 and 1,100. They also agreed that warhead limits would be reduced from the current range of 1,700-2,200 to as low as 1,500.

Yet, despite the fact that the Obama Administration has agreed to step back from installing a land-based defensive missile shield in parts of Europe in order to placate them, the Russians recently announced a step up in their strategic nuclear capability. This announcement followed Obama's talking on his trips to Europe and beyond about how America will begin downsizing its nuclear arsenal in the hope others will follow suit for the sake of one day achieving total nuclear disarmament.

One must ask: Is this true achievement in the matter of world peace — or is it shades of "peace in our time" in 1939?

Such "peace-making" — applied to Israel and the Mid-East peace process — is especially troubling, although quite intriguing, in my view. Joel Rosenberg wrote about the possible surreptitious things that might currently be plotted in that regard. Rosenberg foresees a scenario where the United Nations Security Council might, in an effort to take the spotlight off Iran's developing nuclear weapons, instead shine it on Israel. The UN, observably an anti-Israel organization in large part, would through Security Council resolution, in Rosenberg's scenario, force Israel, which has never acknowledged possessing nuclear weaponry, to join the Nuclear Non-Proliferation Treaty (NPT). Israel would then be forced to open itself to inspection. Any refusal might lead to an international coalition against the Jewish state in an effort to force it to comply. This could be attempted, either through severe sanctions against Israel, isolating it from the world community of nations, or even by attacking it, as happened against Saddam Hussein's Iraq in both recent Gulf conflicts.

Secondly, Rosenberg ponders the possibility of the international community creating, then recognizing, a Palestinian state through fiat, rather than through a negotiating process. Such unilateral action would almost certainly set up a confrontation of biblical proportions, he believes. The world community has long wanted Israel to give in to demands, but has shown no such impatience for the leaderships of Israel's antagonists. Rosenberg correctly points out that President Obama has increasingly — in recent speeches given while he travels the world — taken the lead on this effort. He is demanding that Israel return to its pre-1967 borders, divide Jerusalem, and allow the Palestinians to have a state with contiguous borders (thus cutting Israel proper in two).

We return to the questions Obama's winning the Nobel Peace Prize flushes into the open. I am privileged to have friends and colleagues who think deeply in these matters, especially on their possible prophetic implications. One such confidant has proffered fascinating thoughts on recent developments regarding the Nobel Prize for peace as they relate to eschatology as we near the end of the age. I find his analysis particularly thought-provoking, so, without giving the writer's name, upon his request that I not mention it in his exclusively shared remarks, I'll give a few of these thoughts here:

The Nobel Peace Prize [to Barrack Obama] was awarded purely for political reasons, and perhaps for strategic reasons. Its timing is bizarre. He must have been nominated within 10 days of being sworn in. He had not then, nor has not since, achieved any tangible progress toward peace. He was not rumored to be among the finalists. However, the vote was unanimous. The announcement came weeks before expected.

It has interesting implications regarding several military issues currently facing the US and Israel. Overtly, Obama has yet to decide whether to commit further troops to Afghanistan. However, more subtly, Obama has to consider military options with respect to Iran. Yesterday's papers reported the possibility that the US was gearing up to take direct military action against Iran. This was based on the accelerated development of the Massive Ordnance Penetrator, or MOP, bunker-busting bomb. While this story is probably false, the US may have been planning to assist Israel in striking Iran, either by providing arms, intelligence, over flight permission or logistical support. The Nobel Peace prize renders an affirmative decision to make war or assist Israel in making war significantly more difficult.

Finally, given the terrorist threat under which the US finds itself, and given the serious risk of nuclear attack on US cities and the need to retaliate as a matter of self-defense, the Nobel Peace Prize may result in a conflict of interest wherein Obama's tacit peace pledge conflicts with his sworn duty to defend the Constitution and the US. In my opinion, the pressure of being awarded the Nobel Peace Prize is particularly acute in this time period between it having been awarded and his accepting it.

I am convinced that the Antichrist will be awarded the Nobel Peace Prize someday. I am not prepared yet to say that it was designed with the Antichrist in mind, but I do think that the committee that now decides the winners is spiritually compelled to award it to Antichrist types and specifically for the benefit of those who advance the New World Order and are enemies of Israel.

In short, the awarding of the Nobel Peace Prize to Barack Obama has been intentionally designed to frustrate any efforts on the part of the US to help Israel defend itself against Iran.

Strange developments are afoot while the world looks for the prince that shall come, and we who name the name of Christ look for the true Prince of peace.