Jews in Israel Preparing for Service in the Rebuilt Jewish Temple

A group of religious Jews who live in the Jordan Valley near the ancient city of Jericho are taking practical steps to prepare for the building of the third temple in Jerusalem by preparing descendants of the Kohanim, the priests, and the Levites for service in this next temple. These Jewish leaders have established a training center where temple priests can learn exactly how to conduct the daily temple services and offer the required sacrifices as dictated by the Jewish laws from the Biblical book of Leviticus.

The training center will include an exact replica of the temple where the student-priests can learn to do their duties which are required and this training center, the organizers believe, comes at an historic time marking the beginning of the work for the third temple. 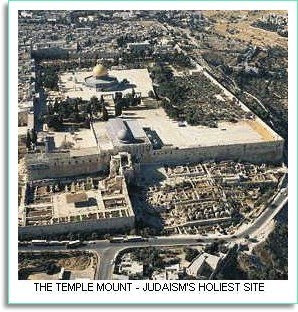 With the establishment of a training center in Israel to prepare the Jewish priests to operate a rebuilt temple in Jerusalem we see Bible prophecy ever so close to being fulfilled.

Recently, the Moslem violence on the Temple Mount focused the world on a controversial piece of real estate and an even more controversial project on this site - the rebuilding of a Jewish temple. Moslem concerns about the Jews taking the Temple Mount to build a temple there have been fueled by the number of projects going on to prepare for the eventuality of a Jewish temple in Jerusalem.

Bible prophecy says that there will be a temple on the Temple Mount in Jerusalem in the last days (Daniel 9:27, Matthew 24:15, II Thessalonians 2:4, and Revelation 11:1). This a temple that will be built during the seven year Tribulation period, that time of testing yet in the future.

As evidenced by this report, the next temple has been prepared for and construction could start very soon. Bible prophecy will be fulfilled.

Preparing for Service in the Rebuilt Temple - Arutz Sheva

School to Prepare for the Rebuilt Temple - INN