There is a dark and scurrilous move by the White House to appoint Marxists in advisory roles with regard to government bodies that oversee the free press - the Federal Communications Commission and the Federal Trade Commission. These communists seek to replace free religious and political speech with a media controlled by the government. This Administration is attempting to shut down the free press by imposing regulations on media and redefining the government's role in media ownership. The Marxists involved come from an organization called "The Free Press" - a Marxist mouthpiece touting transforming democracy by reforming media. 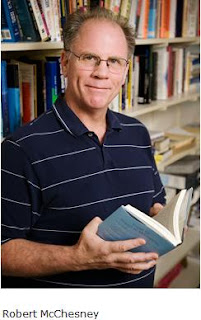 "...it is the specific responsibility of the left to urge not only the militant organization of the underlying population, but also the kinds of change, going against the logic of the system and relying on an expansion of government...In the end, there is no real answer but to remove brick by brick the capitalist system itself, rebuilding the entire society on socialist principles."

Former Free Press spokesperson Jen Howard, an activist for Marxist media reform, is the press secretary for the chairman of the FCC. Free Press Policy Director Ben Scott, who has quite an impressive socialist resume, has been meeting with the FCC on media reform.

Another Marxist with close ties to McChesney is Mark Lloyd, now the Associate General Counsel and Chief Diversity Officer at the FCC. Lloyd wrote a book entitled "Prologue to a Farce: Communication and Democracy in America." McChesney contributed to and edited the book. Lloyd agrees that social change (Marxism) can be established by "democratic" ownership of the news media. He contends that "the ability of a government to facilitate political communication among its citizens determines the success of the democratic experiment." This means that the government, not corporations or private individuals, should own or control the media - the antithesis of the free media.

"Thou shalt have no other gods before Me."

It is time to think the unthinkable. The Marxist coup is underway. It is radical and revolutionary. It is against the inalienable rights of individuals endowed by their Creator.

Culture of Corruption: Obama and His Team of Tax Cheats, Crooks, and Cronies - Michelle Malkin (Book)