Freedom of Speech and the UN

Put shouting "fire" in a crowded theater aside, freedom of speech is one of the most fundamental rights that Americans enjoy. The liberty to speak one's mind, to offer one's views - even if those views are obnoxious to those around you – is one of the great blessings of living in a free country.

Yet, we sometimes find the strangest people hindering free expression. The Obama Administration, which would be expected to uphold free speech rights, has in fact pushed for limiting freedom of expression in the name of making peace with oppressive regimes. While describing the importance of free speech on one hand, the US pushed to pass a resolution that also condemned those who used their free speech to speak against religion - specifically Islam.

Historically, there have been limits set on free speech; as in the "fire" example, self-expression has historically been out-ranked by safety issues. Self-expression can also be demoted according to cultural standards of decency. For instance, Roger Federer can use foul language on the tennis court all he wants, as long as those words don't get picked up on live television. And while we no longer take traitors out and shoot them, national security still trumps over the right to a loose tongue. There have always been limits on freedom of speech for the safety and decency of society.

Yet, our freedom to speak our minds should not be tampered with, regardless of whether our views could offend somebody. 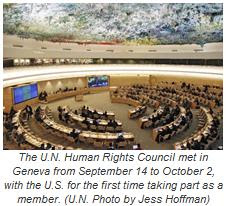 After Muslims rioted in Europe over cartoons depicting Mohammed, Muslim countries pressed the United Nations to pass a resolution condemning articles or cartoons that defame Islam. In an effort to reach out to Muslim countries, the Obama Administration has recently backed a UN resolution that on one hand states that freedom of speech is essential, and yet condemns attacks on religion. The resolution is no law in itself, and is mostly a feel-good concession to Islamic nations, but it is a far cry from promoting true freedom of religion and religious expression in already oppressive Middle East countries.

Certain forms of "expression" are understandably outlawed in a healthy society, things like child pornography and threats to murder people. Religious viewpoints, on the other hand, are absolutely protected free speech. Americans support freedom of speech, freedom of religion, and freedom of the press, which means allowing those freedoms even when we disagree with what is said.

In fact, religion and politics are two things that should be specifically open to criticism, because they are areas in which it is vital humans have solid understanding of what is true and good. In the spirit of hacking out the truth or the best policy, people are allowed to say what they think - no matter how offensive one person's religious or political views are. We have to remember that the Truth is often considered offensive, and when we start censoring one group, we all are endangered.

By backing Muslim calls for limiting freedom of speech when it comes to religion, the US has given a moral victory to those countries where human rights are regularly abused in the name of Islam.

"The administration's position should hardly be a shock because the Left almost always speaks of "rights" in terms of group identity — not the individual. Thus every right must be evaluated in terms of identity politics and class struggle (white vs. black, male vs. female, rich vs. poor, bourgeoisie vs. proletariat) and described in terms of victimization and liberation. For the Left, the individual does not have identity or rights — such things are possessions of the collective to which one belongs. Therefore, the administration's position enunciated before the UN Human Rights Council coincides with the interests of Islamists: silencing critics of Islam by making it impossible to criticize their perverse (by Western standards) and militant worldview."

The UN Human Rights Council passed the resolution on Friday. Christian groups have already launched a campaign to protect Christians in Islamic lands. The resolution is seen as a danger to religious minorities and dissenters.