The last of the seven Jewish feast days, the Feast of Tabernacles, is being observed by Jews in Jerusalem and around the world by building a "succa", a thatched hut, and then living in this succa for the entire week long Jewish holy days as they complete the annual cycle of Jewish holy days given to them by God some 3,500 years ago.

The succa, a thatched hut similar to the dwelling place of the Children of Israel during their 40-year long wandering in the wilderness on their trip to the promised land, will be erected near their homes and apartments so that the family may use this succa in celebration of this annual event. Thousands of Christians from around the world will join the Jews in Israel to celebrate the feast because of the Biblical directive for all, both Christians and Jews, to observe the Feast of Tabernacles on a yearly basis.

The celebration of the Feast of Tabernacles by Jewish people in Jerusalem and around the world has not only a historic significance but a prophetic significance as well according to Bible prophecy. 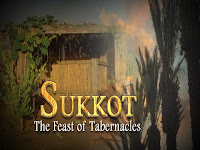 Since the end of the Jewish holy day of Yom Kippur, the Day of Atonement, Jewish families in Israel and around the world have been erecting their succas, a thatched hut, to have it ready for the week long celebration of Succoth, the Feast of Tabernacles.

The succa was the transportable housing for the Children of Israel as they wandered in the wilderness during that forty year period traveling from Egypt to the promised land. Jewish families will eat their meals, visit with family and friends and some even sleep in their thatched huts, the succa, for the entire seven days of the feast. The historic significance of this feast is to remind the Jews of their travels to the promised land.

Prophetically, this seven day feast is the time when Jews will look forward to the Kingdom Period promised by the Lord and revealed by the ancient Jewish prophets. At the Transfiguration recorded in Matthew 17, when Peter saw Jesus in His glorified body, along with Moses and Elijah, he wanted to build three tabernacles, three succas, because he thought the Kingdom had arrived. That physical earthly Kingdom will begin on a future Feast of Tabernacles when Jesus Christ sets up His Kingdom.