I am going to take a stand here and say that since socialism is a subcategory of humanism, that it is against the precepts of God and is, therefore, unacceptable to Christians from a Biblical standpoint. Whether you agree or not is up to you. Many Christians will use the early church to justify socialism. Acts 4:32 says,

"And the multitude of them that believed were of one heart and of one soul: neither said any of them that ought of the things which he possessed was his own; but they had all things in common."

Verse 34 goes on to say that nobody among them lacked in that people who owned property sold it and the money was laid at the apostles feet for distribution unto "every man according as he had need."

The socialists, communists and humanists miss in this Biblical principle the point that everyone did it voluntarily unto the Lord out of the abundance of their hearts. They were not required to do it by the government with the government redistributing it based on the government's idea of how to control the people. This is how Satan changes God's precepts just a little to lead astray the deeds of men. For it is in the heart the things which matter most to God. The account in Acts is exactly how the church is to behave - that there would be such joy in assisting with one another's needs because of the commonality of Christ, that none would lack. 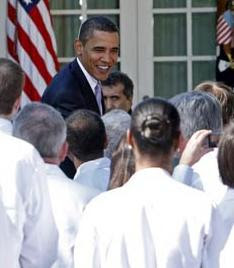 When the church doesn't behave as God intended, the door is opened for Satan to establish an approach to take the focus off of Jesus and put it on man. The current example of this is socialized healthcare offered by the White House and Congress. It is a humanist approach to solving a problem created by the church not doing its job. The government replaces God by mandating that all contribute with the government deciding who receives. According to the government, less than 15% of the population doesn't have healthcare. So it plans to mandate that 85% of the population receive government run healthcare so the 15% will have it, too.

Satan deceives man through fear and causes him to act apart from God. Proverbs 29:25 says,

"The fear of man brings a snare: but whoso puts his trust in the Lord shall be safe."

Government run healthcare is a snare of socialism. It is a humanist lie that will make every American an indentured servant of the government. This is the very reason Congressional leadership is fighting against posting the healthcare bills for 72 hour public review before any vote on the legislation. This is why the White House is lying about what is in the legislation and its intent. But it is a clear example of what happens when the church operates under the precepts of man rather than the upon the commandments of God.

Senate and House Ready to Put Lipstick on a Pig: Passing Healthcare Reform Under a Different Name - Hot Air

Does the Bible support Communism? - GotQuestions.org