According to Harvey Morris, reporter for the Financial Times at the United Nations, President Barack Obama became the first American president to chair the United Nations 15-member Security Council on September 24, 2009, during the 64th annual session of the UN General Assembly.

The UN Security Council presidency rotates monthly among the nations. 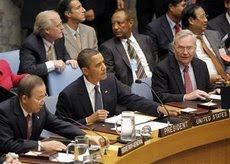 September 2009 just happened to be the month for the United States to hold the UN Security Council presidency — an excellent time for Barack Obama to become the "chairman" of the special summit-level session on the subject of nuclear non-proliferation and nuclear disarmament, one of several global agendas that the Obama administration wants to see discussed on a multinational level.

Susan Rice, U. S. envoy to the United Nations remarked,

"The council has a very important role to play in preventing the spread and use of nuclear weapons, and it’s the world’s principal body for dealing with global security cooperation."

Her statement was the latest by the Obama administration to emphasize a shift from the strategy of the previous Bush administration, which was criticized for seeking to use the world body to endorse its own unilateral policies.

In other words, Mr. Obama seeks to become a "team player" at the UN. He is part of a worldwide plan to eventually bring all nations to submit to the sovereignty of the United Nations, thus creating a New World Order — a One-World government.

On September 22, The UN hosted a debate on "climate change" bringing a fresh impetus to the search for a "global climate deal" at Copenhagen scheduled for this coming December. If several nations agree to the UN-sponsored proposition, the UN will be empowered to force nations to stop emitting greenhouse gases and tax those who do.

The U. S. proposal for "Cap and Trade" legislation will raise taxes through local utility bills. Imagine what this could do toward funding the United Nations in the years ahead.

President Barack Obama is taking on a huge responsibility by welcoming America’s enemies to the United States. Plus, his chairing the UN Security Council’s meeting on nuclear non-proliferation reveals his globalist agenda for America’s future.

Chairman Obama — the title has a certain ring to it, don’t you think?

Obama on Olympics: ‘You Can Play a Great Game, Still Not Win’ - Wall Street Journal

Obama vows to push ahead on climate talks - AFP

Analysis: Chicago's loss is a blow to Obama, too - Forbes