NORTHERN WEST BANK – Training received at current American-run courses for Palestinian militia men will likely be utilized in the not too distant future to kill Israelis, U.S.-trained Palestinian gunmen told WND in an exclusive, in-person interview this week.

WND met seven members of the Palestinian Authority security forces who recently received training at U.S.-run bases as part of a stated effort to reform the PA's militias. All seven of the interview subjects formerly were leaders of the Al Aqsa Martyrs Brigades terrorist group; some are suspected of still being involved with Brigades activities. They were all granted amnesty by Israel as part of a gesture to bolster PA President Mahmoud Abbas' Fatah organization against Hamas.

The meeting took place at a restaurant in a northern West Bank city that had been known as one of several major strongholds of the Brigades, the declared military wing of Fatah responsible for scores of suicide bombings and deadly shootings against Israeli civilians.

The pardoned gunmen agreed to speak on condition their names be withheld and that WND does not print the name of the city in which the meeting took place, citing concerns over their current jobs in the PA's U.S.-backed security forces.

Some of the men present are notorious Brigades members.

Asked immediately why they agreed to be interviewed, one former Brigades leader replied, "Because we know people call us Dayton's poodles, and we want everyone to know that in the next intifada we will be the leaders."

"All the trainings we received from Dayton and company will not affect our loyalty to our people and the resistance," said the former Brigades leader.

The others present concurred.

The gunman was referring to Keith Dayton, the U.S. security coordinator to the Palestinian territories who has been overseeing the training of Palestinian militias.

The past two years, the U.S. stepped up its efforts at training the PA, running more advanced courses guided by Dayton, who in 2007 initiated an advanced program for Palestinian police that trains 500 to 600 cadets at a time at the American bases.

The U.S. currently operates training bases for the PA police and other militias, such as Force 17 and the Preventative Security Services in the West Bank city of Jericho and also at U.S.-operated bases in the Jordanian village of Giftlik. 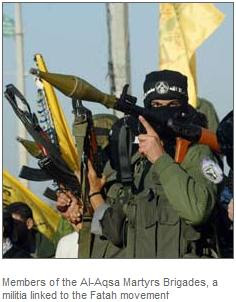 Historically, many members of the Al Aqsa Martyrs Brigades terrorist organization have served openly in the various PA militias, including in top positions. Starting in 2007, then-Prime Minister Ehud Olmert granted pardons for hundreds of Brigades members who were then folded into the PA's various militias full-time.

WND reported two weeks ago Prime Minister Benjamin Netanyahu's government has quietly continued the controversial practice of granting amnesty to Brigades terrorists despite the dismal track record under Olmert, when many of the pardoned Brigades members continued their involvement in anti-Israel terrorism after they received amnesty.

Speaking to WND, the Palestinian militia members were open about using their U.S.-training against Israel.

"We want a Palestinian state either through negotiations or through resistance," said one of the seven gunmen interviewed. "The minute we see the negotiations with Israel are in vain, we will lead the confrontation just like we led it in the last intifada."

Indeed, in that intifada, started after the Palestinians rejected an offer of a state in the summer of 2000, Fatah was responsible for far more terrorism than any other Palestinian group.

"Fatah was the leader of the revolution and will be the leader of any struggle against the occupation," another Fatah interview subject told WND.

"We cannot accept Dayton like we are garbage," he continued. "No, we are Palestinian patriots. What we received from Dayton, we will use when the day comes for a confrontation."

Even Dayton reportedly recently implied his training may be used against Israel.

Speaking at a May symposium organized by the Washington Institute for Near East Policy, The Nation magazine quoted Dayton warning that if a Palestinian state is not created within two years, his Palestinian troops might not continue taking orders.

"With big expectations, come big risks," said Dayton. "There is perhaps a two-year shelf life on being told that you're creating a state, when you're not."

Robert Dreyfuss, The Nation blogger who was present for the speech, wrote, "To my ears, at least, his subtle warning is that if concrete progress isn't made toward a Palestinian state, the very troops Dayton is assembling could rebel."

Already, basic U.S. training provided during the 1990s helped kill Israelis, according to a Fatah militant interviewed by WND in 2007. Current U.S. training is far more advanced, and, if turned against Israel, may result in higher casualties.

Abu Yousuf, a senior officer of Abbas' Force 17 Presidential Guard unit in Ramallah, described to WND in 2007 how his U.S. training helped him kill Israelis.

"I do not think that the operations of the Palestinian resistance would have been so successful and would have killed more than 1,000 Israelis since 2000 and defeated the Israelis in Gaza without these [American] trainings," said Yousuf.

Yousuf received U.S. training in Jericho in 1999 as a member of the Preventative Security Services. He is a Brigades chief in Ramallah, where he is accused of participating in anti-Israel terrorism, including recent shootings, attacks against Israeli forces operating in the city and a shooting attack in northern Samaria in December 2000 that killed Benyamin Kahane, leader of the ultranationalist Kahane Chai organization.

After the Kahane murder, Yousuf was extended refuge by Yasser Arafat to live in the late PLO leader's Ramallah compound, widely known as the Muqata. Yousuf still lives in the compound.

Speaking during a sit-down exclusive interview for the book "Schmoozing with Terrorists," Yousuf said his American training sessions were instrumental in killing Jews:

"All the methods and techniques that we studied in these trainings, we applied them against the Israelis," he said.

"We sniped at Israeli settlers and soldiers. We broke into settlements and Israeli army bases and posts. We collected information on the movements of soldiers and settlers. We collected information about the best timing to infiltrate our bombers inside Israel. We used weapons and we produced explosives, and of course the trainings we received from the Americans and the Europeans were a great help to the resistance."

"I myself received American trainings in Jericho. Together with my Preventative comrades, I received trainings in intelligence methods and military trainings," he said. "In the intelligence part, we learned collection of information regarding suspected persons, how to follow suspected guys, how to infiltrate organizations and penetrate cells of groups that we were working on and how to prevent attacks and to steal in places.

"On the military level, we received trainings on the use of weapons, all kind of weapons and explosives," Yousuf said. "We received sniping trainings, work of special units especially as part of what they call the fight against terror. We learned how to put siege, how to break into places where our enemies closed themselves in, how to oppress protest movements, demonstrations and other activities of opposition.

"We also learned to discover agents that Israel tried to plant in our cells," he said.

Yousuf stressed he "isn't talking about U.S. training in order to irritate the Americans or the Israelis and not in order to create provocations."

"I'm just telling you the truth," he said. "We applied against Israel all that we learned from the Americans."