The man who occupies the Oval Office disputed leftist claims that opposition to his programs and policies are race motivated. He said that instead they are part of a historical debate over the proper role of government. He told reporters at CNN,

"There's been a long-standing debate in this country that is usually that much more fierce during times of transition, or when presidents are trying to bring about big changes."

Speaking to reporters at NBC News, he said,

"It's an argument that's gone on for the history of this republic, and that is, What's the right role of government? How do we balance freedom with our need to look out for one another?" 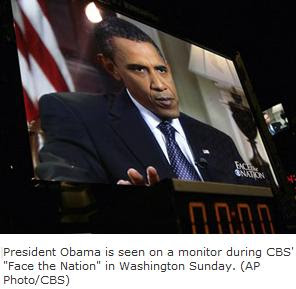 He went on to tell reporters that people are passionate about whether the government can do anything right and that is where he believes the bulk of the vitriol originates.

This is just another example of how he and his administration twist both history and intent of people to make it sound as if everything is reasonable and expected. It is not. First, he defuses the charges of race by going against what his most liberal supporters have been trying to tag the opposition with - the race card. Then he tries to say that there is a longstanding and historic debate in this country over the role of the government. That debate was settled in 1788 with the ratification of the US Constitution.

It is only those who are trying to overthrow the form of government in the United States who have made any debate whatsoever regarding the role of government. It is radical, unreasonable and an out and out lie to characterize the current passions against establishing socialism in this nation as a historic debate. The only historic debate regarding this type of insurrection against the Constitution are or were those chronicled as taking place in the clandestine meetings of communists and socialists and the back room strategy sessions of certain trade unions that were or are fronts for communism. The Founding Fathers were adamantly opposed to government intrusion into business and private lives.

The Constitution is very specific. The 10th Amendment also limits government in stating "The powers not delegated to the United States by the Constitution, nor prohibited by it to the states, are reserved to the states respectively, or to the people." There is no debate. The Founding Fathers often confirmed Thomas Paine's quote, "That government is best which governs least." And Jesus said in Matthew 24:4, "Take heed that no man deceive you." The words of deception abound in this Federal government because the usurpers - those who convinced the American people in order to get their votes that they were reasonable patriots - are using deception to overthrow the government and to annul the Constitution.