Overwhelmingly, the key feature of modern Jerusalem is its sensational fulfillment of Bible prophecy.

As I’ve related before, I was once strolling through a museum in the Old City, when I happened upon the plainest-but-most-important display in the building: a plaque reference to Zechariah 2:4, in which we are told that in the last days, Jerusalem will be “inhabited as villages without walls.”

From outside Jaffa Gate in the Old City, one can look west and see a thriving metropolis that looks like many others...until you realize that by spilling out over the Old City walls, Jerusalem today is a spectacular confirmation of Scripture.

There is much more in the western part of the city, with the Israeli seat of government, the Knesset, the prime minister’s residence, fabulous hotels, and the Shrine of the Book (where the Dead Sea Scrolls are held).

An interesting aside about the prime minister’s residence: I was once walking through the city — for some reason — and I almost walked right onto the grounds; I hadn’t been paying too much attention. This was when Sharon was in office and the Gaza Pullout was being readied. The security around the place was incredible. This beautiful residential area was teeming with police and IDF soldiers.

Upon traveling from the airport at Tel Aviv (Ben Gurion), you enter Jerusalem from the west, traversing steep streets and spotting building after building made from the famous Jerusalem stone, a sturdy limestone building material.

In fact, one doesn’t think of the city as particularly beautiful, given the fact that it has such a special place in God’s plan. Yet the place pulsates with meaning. 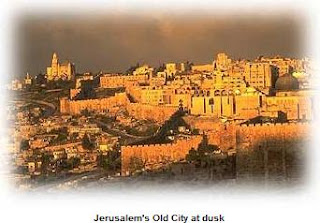 On my first visit, as the taxi came closer to my hotel, I instinctively knew I was getting close to the fabled Old City . I took it as a particular kindness toward me, but God allowed me to see the place for the first time as dusk approached; the floodlights at the base of the Old City walls illuminated it in breathtaking fashion.

On Ben Yehuda Street , not terribly far from the Old City , but still on the western side, one can stroll through an outdoor mall of sorts. Honestly, this was the scene of some suicide bombings in the ‘90s, but all is calm now. Ben Yehuda Street slopes downward and has the usual tourist t-shirt shops, but more interesting ones, as well, including an army surplus store.

At the end of the street is a Steimatsky’s Book Store. It was there I first found my beloved copy of Yoni’s Last Battle, the detailed account of the famous Entebbe raid.

Another aside, this one funny: I was in this Steimatsky’s once with my late friend and mentor, David Lewis. As we prepared to pay for our purchases and leave, I noticed that David had a copy of the German magazine, Der Spiegel. I was impressed.

“I don’t,” he answered a little sheepishly before brightening, “But there are some great articles in here!”

By the way, eating a bagel on Ben Yehuda Street (named after the scholar who revived the ancient Hebrew language in the last century) is as good as it gets. A friend drove me through the area one day and pointed out old buildings that are now apartments. “It was there we smuggled weapons during the War of Independence,” he muttered.

Should you visit Jerusalem , I’d recommend trying to avoid some of the American-style hotels, simply because you can get that at home. Look instead for others with more character (and a higher price tag). The American Colony, The Mount Zion, of course the King David. There are several hostels available too that are adequate and most important, cheap.

There is no other city like it in all the world. If you don’t see it in this life, you most assuredly will in the next!