The answer to this question appears to be yes, although there is no humor in it. In early August 2009, for the first time in 15 years, the Pentagon was tracking a pair of Russian subs roaming just outside our territorial waters about 200 miles off the east coast of the United States. 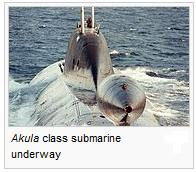 We know that the Russian/Muslim Confederacy invasion of Israel will happen (See Ezekiel 38). We don’t know the exact time frame, but we do know that it will not happen in the immediate future.

A prophecy is not fulfilled until it meets the exact criteria of the prophecy. At least two things have to happen before this Russian invasion of Israel takes place. They are:

According to Psalms 83, Israel’s bordering Muslim countries will make a covenant to come against Israel.

“Come, let us wipe them [Israel] out as a nation....For they have conspired together with one mind; against You do they make a covenant” (Psalms 83:4-5). [See article written by Bill Salus on this BPT BlogSpot 9-3-09].

The outcome of this conflict will be victory for Israel (Psalm 83:16-18). When Israel defeats these nations, it will flourish with the spoils that it takes. This victory will also set the stage for Israel to be at peace. If Turkey has allied itself with Russia by this time, the stage will be set for the coming Russian invasion.

Is it possible that we are presently experiencing the early rumblings of this Arab-Israeli conflict?

What About the Russian Subs?

Are the Russians already planning this invasion of Israel? Those Russian subs were off the U.S. coastline for a reason. If the U.S. still supports Israel prior to this invasion, which is not likely under the current administration, will Russia plan a two prong attack? Is it possible that the recent spotting of the Russian subs off the U.S. coastline is a sign that Russia is in the planning stages to attack the U.S. first or simultaneously with the invasion of Israel? If the U.S. backs Israel, Russia knows that an attack on Israel would also be an attack on the U.S.

Consider the timing of the points discussed in this article, along with all of the other developments (toward prophecy fulfillment) that have occurred since May 14, 1948 [For an overview of these developments, see The Last Generation]. This article plus many more prophecy fulfillments gives evidence that we are truly in the last generation. If you do not know Jesus Christ as your Lord and Savior, ask Him into your heart today. Don’t wait until it is too late. Today is the day of salvation.