Prophecy at the Midnight Hour: White House Yields US Sovereignty to Global Governance

The man who occupies the Oval Office (OOO) committed an unconstitutional and possibly a treasonous act in yielding the sovereignty of the United States of America's free market economy to the rule of the International Monetary Fund at the G-20 meeting in Pittsburgh September 25. This act of international socialism was hailed by the news media as a breakthrough in global economic reorganization and the establishment of a global economic government for the 20 nations that control 90% of the world's economy. An international body will soon control the US economy and the entire world has taken a gigantic step toward the prophetic one world order of the antiChrist. 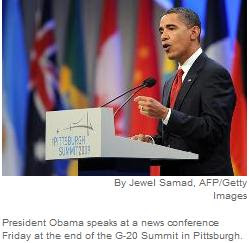 After the G-20 meeting, OOO explained the G-20 agreement,

"our new framework will allow each of us to assess the others' policies, to build consensus on reform, and to ensure that global demand supports growth for all."

He also said that the G-20 agreed to no longer support the global fossil fuel industry in order to reduce global warming. In straight talk, the US will no longer develop fossil fuels, a global IMF body will manage US banks, and executive pay will be determined by global governance.

This is no less than a Constitutional abortion performed by a man with proven Marxist ties. He has egregiously subverted Constitutional requirements of Senatorial consent by appointing socialists "czars" to run aspects of the government, has violated the 10th Amendment by fomenting the government takeover of the financial and automotive industries, and by attempting to complete a socialist coup against the Constitution by establishing socialized medicine and taxing Americans for the unproven science, yet socialist issue, of global warming. America is truly at a crossroads where the Constitution has been suspended through political usurpation.

The Bible is very clear that the antiChrist will arise and control all the nations. The prophecy clock on the one world order has ticked forward toward the midnight hour. A new day is soon to come where world finances are controlled by a global body of bureaucrats and politicians, paving the way for the one prophesied in Revelation 13:17,

"And that no man might buy or sell, save he that had the mark, or the name of the beast, or the number of his name."

Americans need to wake up and stand against this ungodly and unconstitutional revolution being forced upon them. And Christians around the world need to open their eyes for the coming deception that they are not caught in the snare of satan.

China Is Playing a Leadership Role in Reshaping the World Economy - ChinaStakes.com