Jews in Jerusalem and Around the World Mark Judaism's Holiest Day, Yom Kippur

As Jewish people in Jerusalem and around the world stop for a fast day to mark Judaism's Holiest Day, Yom Kippur, the Day of Atonement, Israel shuts off the Palestinian territories and at the same time remembers the surprise assault by Egypt and Syria that sparked a war some years ago.

The entire nation of Israel shuts down for the twenty-five hour fast as the Jews seek forgiveness from God for the last years transgressions, using the fast day in lieu of the Yom Kippur sacrifice at the temple since there is no temple in Jerusalem. 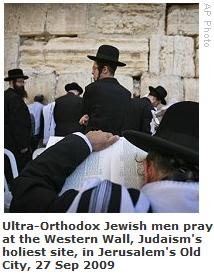 Yom Kippur, the Jewish Holy Day of Atonement, looks back to Biblical times. It also has a prophetic significance, that is according to Bible prophecy.

As Jews in Jerusalem and around the world stop to observe the Jewish Holy day of Yom Kippur, they are reminded how the High Priest at the temple in Jerusalem would enter into the Holy of Holies with the sacrificial blood to pour it on the Mercy Seat of the Ark of the Covenant.

During the ten days leading up to Yom Kippur, starting on Rosh Hashana, Jews were to seek forgiveness from family, friends, loved ones and neighbors for any trespass over the last year.

This act of seeking forgiveness is a part of the Day of Atonement, Yom Kippur, as the Jews seek to be included in the Book of Life and during temple times their sins would be covered for one year, until the next Yom Kippur.

Now without the Temple, Jews give money, do good deeds and pray, along with the twenty-five hour fast on Yom Kippur. Jesus Christ, the Jewish Messiah, will in the future fulfill the prophetic aspect of Yom Kippur as He did the other Jewish Feast Days, in the spring, 2,000 years ago.

Jesus was crucified on Passover, buried on Unleavened Bread, and rose from the dead on the Feast of First Fruits. Jesus, in the future, will come back to earth on Rosh Hashana, and ten days later will enter the Holy of Holies on Yom Kippur, for the purpose of giving salvation to all Jews at that time, Zechariah 3:9 and Ezekiel 43:1-7. Indeed Bible prophecy will be fulfilled.

Israel comes to a halt for Yom Kippur - Ha'aretz

Israelis, Palestinians Clash in Jerusalem Ahead of Yom Kippur - Voice of America