Is Time Running Out?

How can a world filled with secular humanists, atheists, and just plain God-haters be pondering the end of the world? They are embracing what is found in the mystical Mayan calendar that has the world ending on December 21, 2012. And has the media taken notice! The History Channel, Fox News, U.S. News & World Report, ABC News, USA Today, and more are talking or writing about it. Books on the topic are flying off the shelves. Hundreds of Web sites discuss the issue. The world of skeptics is captivated!

Dr. Mark Hitchcock has come out with an excellent overview of the story in his new book 2012 and the End of the World. This ministry carries the book found at "Products." 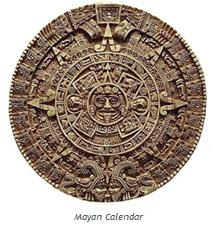 December 21, 2012, marks the end of the 5000-year cycle Mayan calendar. The ancient Aztec calendar corroborates the Mayan end date and points to the same date as the end of the world. The sudden vanishing of these two civilizations remains a mystery. The most accepted theory today is some kind of environmental collapse and resulting famine. One thing is certain: They were sky-watching timekeepers.

The Mayans were obsessed with astronomy, and they built entire cities that were in alignment with astronomical events. There is speculation as to how they attained such an advanced level of knowledge and understanding, although none of it lines up with the Bible. The unbelieving world doesn't know this and is thus connecting the dots improperly as they buy into the 2012 madness. Throw in Nostradamus and the Bible Codes and you have a recipe for the supernatural that the world seems to crave today.

Hollywood is about to join in on this with the movie simply called 2012. It may not be for everyone with its images of death, destruction, scorched earth, and all-out carnage of biblical proportions. The final scene of the trailer shows a stunning image of the U.S.S. John F. Kennedy caught in a tsunami washing over Washington, D.C., and the White House.

Setting apocalyptic dates is nothing new. In the past such people were mocked and rightfully called false teachers. So what's different over something that may be a silly Mayan Y2K? The reaction to this may make that Y2K panic pale in comparison.

Clearly some people are asking questions about the end of the age like never before. As Hitchcock says in his book,

"The rapidly increasing tempo of life, combined with today's natural disasters, wars and rumors of wars, terrorism, and mounting financial uncertainty has given the entire world a sense of impending crisis."

The Bible doesn't suggest any such date but the pop culture of today is captivated with it! Christians should be seizing the opportunity to share the gospel with many who are now giving some credibility to terms like Armageddon, apocalypse, and the end of the world.

Author Mark Hitchcock presents the Christian perspective as to the end of the age. We know some things for sure: We cannot know when Jesus will come and we must stay away from setting dates. Date-setters are upsetters, and they are batting zero as to accuracy. They promote unnecessary worry and even panic. Jesus said no one knows when the end is coming (Acts 1:7). But that doesn't mean that Christians cannot seize the moment here and talk about these issues to some who have swallowed the lie that 2012 is it and the Mayans had the inside secret.

Don't gamble with your eternal destiny. Time may very well be running out. There really is a new world coming. We may be on the threshold. Even though the 2012 phenomenon is not setting a day or an hour, it is still unwise to even suggest years. Previous date-setters have made fools out of themselves. Only God the Father knows and He's told no one!