Idolatry Indoctrination Forced upon the Children of America

There is a concentrated and planned effort by leftists in this nation to indoctrinate young children to idolize the man who occupies the Oval Office (OOO). Many are pointing to this man and saying that he is the messiah - included among them were pre-election pronouncements by people like Nation of Islam's Louis Farrakhan, who said of him in October 2008,

"When the messiah speaks, the youth will hear, and the Messiah is absolutely speaking."

A town in Minnesota displayed a sculpture of him riding a donkey over palms, and news reporter Chris Matthews tagged his coming to power as "New Testament." School children are the targets for this indoctrination campaign. 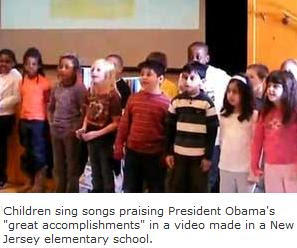 A Burlington, New Jersey Elementary school has come under criticism for defending a video that was recorded showing about 20 second graders singing praise songs to OOO. The song is a version of the song "Jesus loves the little children" and applied them to the occupant of the White House, saying, "red, yellow, black or white, all are equal in his sight." The teacher was a campaign supporter and is now under investigation. But these types of indoctrinations in schools are apparently occurring across America. The National Education Association has distributed a pledge video of celebrities pledging support to the man in the White House.

Now there is a children's book offered on Amazon.com entitled "[OOO's name]: Son of Promise, Child of Hope." One of the 43 reviews of the book says,

"Most distracting, as noted by other reviewers, was the "Lion King/Messiah/Star Wars/Chosen One" kind of vibe given to [sic OOO] throughout the narrative...While it's good to teach children to respect the President of the United States, this book fairly jumps across the line from respect to breathless worship."

"It's loosely based in fact, but the author takes many liberties, creating an almost Messiah-like view of the Illinois Senator. If you are a responsible parent, you should look elsewhere."

The indoctrination of children that there is a new messiah on the block and you should worship him is a page directly taken from megalomaniac dictators who appoint themselves leaders for life. Can anyone say "Hitler Youth?" This is a cruel and deceitful imposition on children that should be punished the same as child predators.

"But whoso shall offend one of these little ones which believe in me, it were better for him that a millstone were hanged about his neck, and that he were drowned in the depth of the sea."

A word study on "offend" reveals that it means "scandalize" or "entice to sin." Exodus 20:3 says,

"Thou shalt have no other gods before Me."

This is idolatry plain and simple.

What is the definition of idolatry? - GotQuestions.org