Events are moving so quickly in the epicenter it can be difficult to keep track of, much less understand the big picture. So here it is in a sentence: An apocalyptic storm is forming over the Middle East. 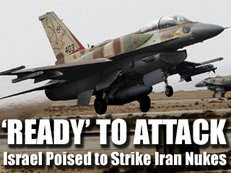 Humanly speaking, war is coming. The West does not seem determined enough to stop Iran from getting the Bomb. So unless the Lord intervenes, Israel might soon feel compelled to launch a preemptive strike against Iran. It won’t be easy, and the entire region could go up in flames.

The stakes couldn’t be higher. So on this day of Yom Kippur, let us commit ourselves to prayer and fasting for the peace of Jerusalem and the physical and spiritual salvation of all of Israel and all of Iran.

Even Russia accepts that sanctions against Iran are inevitable - Times Online