Industries Targeted for Government Takeover are Largest Contributors to Republicans

Democratic House Speaker Nancy Pelosi showed her, her party's contempt for private enterprise in a shocking diatribe against insurance companies during a news conference reported by Reuters. She said,

"It's almost immoral what they are doing. Of course they've been immoral all along in how they have treated the people that they insure. They are the villains. They have been part of the problem in a major way. They are doing everything in their power to stop a public option from happening."

It is amazing that the third person in line for the presidency would express such public disdain for an industry as a whole.

There are most certainly a lot of other industries that are a complete detriment to the American public - let's put on the list Planned Parenthood, the world's largest provider of abortions and one of the largest encouragers of teen sex through the public school system. Or how about the pornography business as a whole? How many lives have been destroyed through pornography, prostitution and the drug trade? These industries are the shadowy villains of society. They are based on a death culture that sees no value in the human being other than what can line their pockets with money. Yet Pelosi singled out the insurance industry. 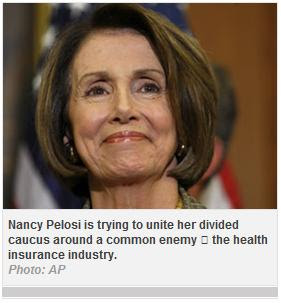 Could it be that since 1990, the insurance industry as a whole has contributed over $237 million to Congressional or higher candidates, 37 percent of it or about $118 million to Democrats and 63 percent or about $199 million to Republicans. In fact, pharmaceutical manufacturers and the entire health care industry has contributed more to Republicans at the same rate since 1990. According to Opensecrets.org, Republicans have received the bulk of campaign contributions from the banking industry, the healthcare industry and the auto industry. The only industry from which Democrats have received the bulk of contributions since 1990, $846 million or 71 percent, was lawyers and lobbyists.

And which of the industries are the ones that this Democratic-led Congress and White House have targeted for government takeover? That would be the ones that have contributed the most to Republican campaigns since 1990. And which industry has the most to gain from litigating lawsuits and influencing legal issues as a result of these government takeover bids? That would be the lawyers and lobbyists whose Democratic contributions nearly equaled all the other targeted segments combined. If you follow the money, you can see why a Democratic government would wish to takeover certain industries.