The word "Zionism" is very common today thanks to the United Nations' condemnation of it during their General Assembly debate on November 10, 1975. Because of this, there is much confusion among believers as to the nature of Zionism and whether or not they should support it or stand against it. We, at Ariel Ministries, get many letters asking us to explain what Zionism is.

There is a lot of propaganda going on concerning Zionism; much of it is guilty of distortion and misinformation. In fact, anti-Zionism has become merely a new term for old fashioned "antiSemitism."

Some circles are claiming that Zionism is a world-wide Jewish conspiracy aimed at the undermining of Western culture in order to allow for a communist takeover. In these circles, Zionism is equated with communism. Much literature is being published propounding this by anti-Semitic groups, and this writer has had the ugly experience of having to see and read much of this hate literature. One of the most famous works that gives this view of Zionism is known as the Protocols of the Elders of Zion. This was actually a Russian forgery by a group of antiSemites who were attempting to propagate the theory of a world-wide Jewish conspiracy. It purports to be the record or "protocols" of Jewish elders who came together to develop a program for world domination, but has been proven to be a Russian forgery by Czarists who were trying to propagandize the masses against the communists. From this came the popular view that communism was a Jewish conspiracy.

On four occasions, when the Arab states failed to defeat Israel with the force of arms, they began a propaganda campaign to equate Zionism with racism. Thanks to Arab oil's power to bribe and to intimidate the nations, the victims of racism are now accused of being racists themselves.

The United Nations has ceased to be an organization seeking justice and peace for the world. It has become a tool for the destruction of existing nations. By condemning Zionism's right to exist, they have condemned Israel's right to exist. It is impossible to separate Zionism from Israel. By this one stroke, then, the United Nations legalized the destruction of Israel by her enemies. The United Nations is indeed guilty of playing into the hands of Satan who will, during the Great Tribulation, organize a world-wide invasion of Israel (Zechariah 12:1-3; 14:1-2). Although this verdict was repealed 17 years later, the damage was already done. 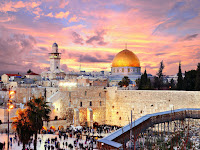 But if Zionism is neither a world-wide Jewish conspiracy nor a Jewish form of racism, then what is it?

The root of Zionism is the word "Zion." Although the word "Zion" originally referred to the mount upon which the Jewish Temple stood, it eventually became equivalent to the name "Jerusalem." Zionism is concerned with the Land of Zion and with its capital, Jerusalem.

Zionism describes a feeling. It is an expression of the longing and yearning that the Jewish people have had in the past and still have for their homeland. Zionism existed during the Egyptian bondage. It existed during the Babylonian Captivity. It exists in these days of the Dispersion which began in A.D. 70. As soon as any Jew expressed a desire to go back to his Land—regardless of his reason—he was expressing Zionism. Any Jew who looked toward and identified himself with the Promised Land, whether he knew it or not, whether he admitted it or not, was a Zionist.

But what most believers want to know is this: Is Zionism biblical? To this question, every believer who takes the Bible literally and seriously must say "yes."

A typical Zionist passage of Scripture is found in Psalm 137:1-6:

By the rivers of Babylon,
There we sat down, yea, we wept,
When we remembered Zion.

Upon the willows in the midst thereof
We hanged up our harps.

How shall we sing Jehovah's song
In a foreign land?

If I forget thee, O Jerusalem,
Let my right hand forget her skill.

Let my tongue cleave to the roof of my
mouth, If I remember thee not;
If I prefer not Jerusalem
Above my chief joy. (ASV)

The longing to go back to Israel by the Jewish captives in Babylon is an expression of Zionism. The word Zion is used twice as is its equivalent, Jerusalem. Zion is to be remembered (v. 1), and so are its songs (v. 3). Jerusalem must not be forgotten (v.5), but preferred above all joys (v.6). It is impossible to be more Zionistic than the author of Psalm 137.

Another Zionist was Isaiah the Prophet, for he wrote in 62:1:

For Zion's sake will I not hold my peace, and for Jerusalem's sake I will not rest, until her righteousness go forth as brightness, and her salvation as a lamp that burneth. (ASV)

Many other passages may be cited, but these should suffice to show that Zionism is a biblical expression. Therefore, believers should be active in two things: first, to stand by the State of Israel; and secondly, to condemn all misrepresentation of Zionism as either a conspiracy or as racism.

Then Solomon assembled the elders of Israel and all the heads of the tribes, the leaders of the fathers' households of the sons of Israel, to King Solomon in Jerusalem, to bring up the ark of the covenant of the LORD from the city of David, which is Zion (1 Kings 8:1 NASB).