Isaiah 7:13-14 is a prophecy concerning the virgin conception and the birth of the Messiah. This is perhaps the most controversial of the messianic prophecies and therefore requires a closer textual analysis than others. The exact meaning of this passage is disputed by rabbis, liberal theologians and even by some evangelical theologians.

The passage talks of "a sign: The virgin will be with child..." There are two areas of controversy here:

We will deal with both of these contentious issues before proceeding to discuss the passage itself. 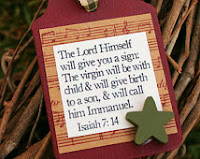 Since Isaiah 7:13-14 requires an immediate sign to King Ahaz, many Evangelicals have taken this verse to be an example of "double fulfillment." This principle states that a prophecy may have more than one fulfillment. This verse may, accordingly, be both a sign for King Ahaz and the sign in Matthew 1:22-23 for the birth of Jesus.

This author does not accept the principle of double fulfillment either here or in any other place in the Bible. If this principle were true, there would be no real need for the virgin birth at all.

There is another, better principle of biblical interpretation which is "double reference." This principle states that one block of Scripture dealing with one person, one event, one time, may be followed by another block of Scripture dealing with a different person, place and time, without making any clear distinction between the two blocks or indicating that there is a gap of time between the two blocks. The act of a gap of time is known only from other Scriptures. There are, therefore, two separate prophecies side-by-side each having their own fulfillment, but with only one fulfillment per prophecy. "Double Fulfillment" states that one prophecy can have two fulfillments. "Double Reference" states that the one piece of Scripture actually contains two prophecies, each having its own fulfillment.

Isaiah 7:13-17 contains two quite separate prophecies with different purposes, and having different fulfillments at different times.

The major debate, of course, is over the exact meaning of the Hebrew word almah, translated here as virgin. In describing a young woman, there are three Hebrew words which Isaiah could have used:

Since everyone agrees that almah means an unmarried woman, if the woman in Isaiah 7:14 were a non-virgin, then God would be promising a sign involving fornication and illegitimacy. It is unthinkable that God would sanction sin, and in any case, what would be so unusual about an illegitimate baby that could possibly constitute a sign?

As far as ancient Jewish writers were concerned, there was no argument about Isaiah 7:14 predicting a virgin birth. The Septuagint is a Greek translation of the Hebrew Scriptures made about 200 B.C., 200 years before the issue of Jesus' Messiahship ever arose. The Jews who made this translation, living much closer to the times of Isaiah than we do today, translated Isaiah 7:14 using the Greek word parthenos which very clearly and exclusively means a virgin.

There can therefore be no doubt that the unique event which God is promising as a sign is the miraculous conception of a son by a girl who is still a virgin.

Therefore the Lord Himself will give you a sign: Behold, a virgin will be with child and bear a son, and she will call His name Immanuel (Isaiah 7:14 NASB).