Make No Mistake About It, European Anti-Semitism Is Back 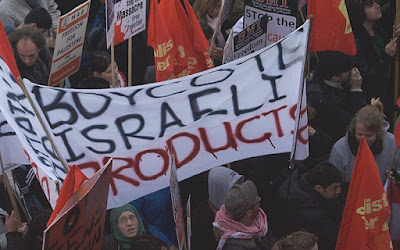 (CJN)—The latest in a long series of discriminatory actions by the European Union (EU) against Israel is the implementation of a requirement of distinguishing labels on goods and produce shipped to Europe by Israel from the disputed territories. A further distinction is to be made between those items of "Palestinian origin" and those of "Israeli origin." Such a step clearly encourages the public of all states which are part of the EU to boycott products which have an Israeli origin.

This is reminiscent of the early days of the Nazis. Placing restrictions on Jewish businesses was the forerunner of ever increasing discrimination of the Jews and the ultimate attempt to eliminate them.

As proof of the logical result of this new requirement, a Berlin department store withdrew all Israeli goods from its shelves, explaining that it would sort out what came from the territories and put the goods back after proper labelling. The store only made the decision to put all the goods back on its shelves after public pressure began to mount.

Such orders from the EU also encourage those who clamour for a boycott of all Israeli products and of any interaction with the Jewish State—the boycott, divestment and sanctions (BDS) movement, whose intent is to demonize and totally isolate Israel, with the ultimate aim of wiping it out.

Based on its preoccupation with the Jewish State, the EU appears to be fast becoming very similar to the United Nations, where it is an accepted fact that there is an automatic anti-Israel vote for all resolutions presented to the General Assembly....

One is inevitably drawn to the conclusion recently enunciated by at least two prominent American commentators, who belong to disparate sides of the political spectrum—syndicated columnist Charles Krauthammer and lawyer/commentator Alan Dershowitz. Both are certain we are experiencing (note, not "witnessing") the resurgence of the anti-Semitism that stalked Europe for almost 1,900 years.

History books are replete with the endless discrimination against Jews and their businesses, the pogroms as well as other pernicious assaults and slaughter. After the results of the Nazi Final Solution, with all of its barbarous torture, dehumanizing and murder of millions, were revealed, the world was shocked, and for a time it was temporarily inappropriate to demonstrate hatred of the Jews. The culmination of centuries of wanton, irrational hatred—state organized, but willingly abetted by so many citizens of occupied European countries—caused anti-Semitism to be hidden for a while. But that "while" is now over. And we Jews had better realize it.

Europe, with the exception of well-intentioned individuals and, prominently, the Czech Republic, is revisiting the elimination of Jewry, only now it is concentrated on the new scapegoat—Zionism/Israel. Spurred on by Arab and Islamist encouragement, hiding behind the condemnation of "occupation," "persecution," "withdrawal of human rights," "apartheid" and other spurious calumnies, the EU is applying a double standard, or a standard where none applies to others. It's time to face facts: Europe is re-occupying its traditional place as the breeder and feeder of anti-Semitism. Make no mistake about it.