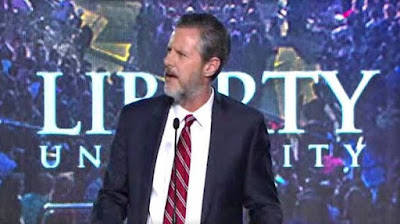 (CHRISTIAN POST)—Liberty University President Jerry Falwell Jr. told students on Wednesday that the university will soon be changing its gun policy to allow those with concealed-carry permits to have guns inside residence halls.

The Lynchburg News & Advance reports that Falwell, the son of the Evangelical school's founder Jerry Falwell Sr., told thousands of students at his final convocation of 2015 that he has proposed changes to the university's concealed-carry policy to allow students to keep guns inside their dorm rooms.

"As the president of this university community, I've helped nearly 15,000 students and 7,000 faculty and staff," Falwell stated. "I take very seriously my responsibility to keep you safe in an increasingly dangerous world."

Although the change in the policy has not yet been voted on by the school's executive board, Falwell argued that he is "99 percent sure" the change will be approved.

Falwell's proposed policy change comes after he received much criticism when he commented after last week's terror attack in San Bernardino, California, that allowing people to have guns will help "end those Muslims."

"I've always thought, if more good people had concealed-carry permits then we could end those Muslims before they walked in killing," Falwell said last week. "Let's teach them a lesson if they ever show up here."

Falwell later clarified his remarks by explaining that he was referring to Islamic radicals, not peaceful Muslims.

Despite the comments, Falwell told students that his quest to allow them to have guns in residence halls is not due to fear of Islamic terrorism but rather the rise in all forms of terrorism in general, especially attacks on college campuses. He cited the April 2007 shooting at Virginia Tech University in Blacksburg that killed 32 people.

"It wasn't because of Islamic terrorism," Falwell explained. "It was because of what happened just an hour and a half up the road at Virginia Tech. More than 30 innocent students and faculty were just murdered viciously and none of them had the ability to protect themselves. From the day that happened, I thought we needed to do something here at Liberty."

The news site reports that this isn't the first time Liberty University has taken steps to make the university more welcoming of guns. In 2010, the university introduced a free concealed carry class for students and faculty, which over 1,600 people have taken.

In 2011, the school adjusted its gun policy to allow students and staff to carry guns anywhere on campus, except for the residence halls.

"So we're making that change at your request," Falwell asserted. "We must also look out for each other, report suspicious activity and be alert."...

Quincy Thompson, Liberty's student body president who does not currently hold a concealed-carry permit, told The Washington Post that most of the university's students approve of Falwell's proposal.

"I believe we have the safest college campus in America," Thompson said. "We also have students who have been given the opportunity to defend themselves."...