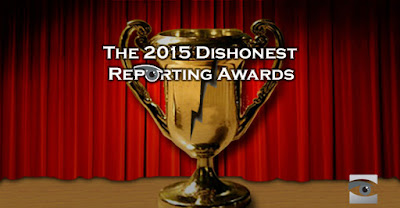 (BIN)—Media watchdog organization HonestReporting, which monitors anti-Israel bias in the media, has announced the recipients of its 2015 Dishonest Reporting Awards. The Dishonest Reporting Awards are bestowed upon the year's top eight worst offenders against journalistic integrity and professional standards when it comes to reporting about Israel.

The first award on HonestReporting's list concerns the libelous charge that Israel annually floods Gaza by opening southern dams. The allegation appeared in such media outlets as AFP, al-Jazeera, Russia Today, and the Daily Mail....

The New York Times received its Dishonest Reporting award over an inflammatory article it published in October questioning whether the Temple Mount was actually the historical location of two ancient Jewish temples....

Eventually, the New York Times was forced to issue an editorial statement which admitted that the article, as originally worded, was factually incorrect, and that no "credible historian" would deny either the existence or the location of the Jewish Temples.

The last Dishonest Reporting award went to MSNBC for airing a map of Israel which grossly misrepresented the "Palestinian loss of land" since 1946. The network aired an apology a week later acknowledging that the maps were misleading.