Q. Much earlier in the year a Christian friend sent around an email promoting the DVD Left Behind or Led Astray? They said they had become convinced of the pre-wrath position. I wrote a pretty strong criticism of what I saw in the DVD trailer. It was sufficiently strong for the person to retract their view which probably means they didn't hold so strongly to the pre-wrath position after all. ☺

However I have just seen Dr Paul Wilkinson's critical response to the DVD and I note there is a response to his response.

Something that caught my eye related to a response Joe Schimmel gives to the question of re-populating the millennial kingdom.

Much of what he says here is fine. Certainly Jews will be saved at the second coming and these will enter the millennium but what about the Gentiles in the millennium?

How are people allowed into the kingdom at this time? We can look to Moses and the generation that entered the Promised Land in the Old Testament. Jews were wandering in the wilderness for 40 years. Only Joshua and Caleb were allowed to enter the Promised Land. So who else went with them? Those who had not yet reached the age of accountability. The Lord said that anyone who was 20 years or younger could go in with them. They would have been too young when the nation of Israel (adult Jews) sinned, therefor those 20 years or younger were not held accountable. Likewise, when the antichrist is reigning and people (adults) are taking the mark of the beast, young people will not be taking the mark, they're too young. (And even if they did, they would not be held accountable for it because they are too young to know what their parents are making them do.) So there will be many young people who will enter into the millennium who do not have the mark of the beast and are under the age of accountability.

So according to him the source for populating the kingdom is people under the age of accountability.

Does this mean that the question regarding who is left to populate the millennial kingdom can be satisfactorily addressed by those who reject a pre-trib rapture and that pre-tribbers can't use this as an argument against these other positions? 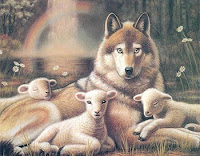 Who Enters the Millennial Kingdom?

A. May the Lord bless you for doing your part to bring to light the erroneous claims made by Left Behind or Led Astray? It sounds like your friend benefited from what you had to say (2 Ti. 2:24-25).

The issue at hand, as I understand it, is: "Who enters the Millennial Kingdom in a natural body to provide a reproducing population during the 1,000 year reign of Christ on Earth?" Pre-tribulational rapture proponents point to the problem with a post-tribulational rapture: if all those in Christ receive a glorified body at the rapture and if the rapture takes place at the return of Christ, then who is left to enter the kingdom in a natural body? Hence, this novel suggestion which posits a group of individuals who are neither fit for the rapture (too young to believe) nor fit for judgment (too young to have had the mark applied, or too young to be accountable if they did).

Some thoughts in response to what you've shared:

The proposal does have one thing going for it: ingenuity. But, in all seriousness, which is more plausible?

If I were a betting man, I'd put my money on the first. ☺

[1] We know they don't believe or they would have been glorified with all other believers at the rapture.