Biometric 'Tech Tattoos' Could Be the Future of Wearables 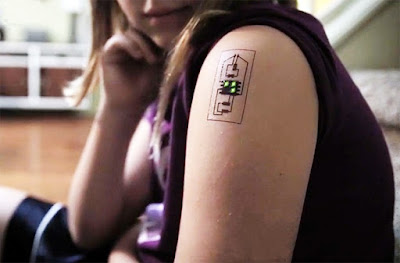 Chaotic Moon has come up with electronic tattoos which gather biodata while literally being planted on the user's skin.

The biometric tattoos, unlike their Fitbit and implant kin, are applied like a temporary tattoo. They are removable and capable of monitoring a range of factors, from heart rate to body temperature to location.

"This is going beyond what the fitness tracker is," says Eric Schneider, creative technologist for Chaotic Moon. "This is something you can put on your body once a year that monitors everything a clinic would do in a physical, and sends that to your doctor. If there's an issue, they could just call you."

Schneider also mentions use for the tech tattoos in banking, saying that keeping financial information attached to your skin would be less vulnerable than inside a loose wallet. Ben Lamm, CEO of Chaotic Moon, agrees on the biowearables' wide array of uses....