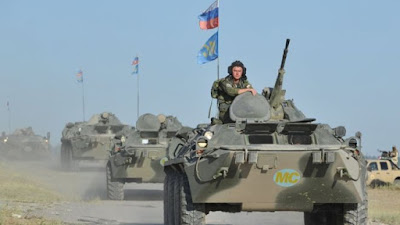 (BBC)—Leaders of post-Soviet states are gathering in Kazakhstan to attend the summit of the Commonwealth of Independent States (CIS), a regional organization dominated by Russia. One of the key documents they are expected to sign is a concept of military co-operation until 2020.

Russia has been pushing its military presence across the region and this document will certainly fit this policy.

Interestingly, this document will be reviewed in Central Asia, where Russia has been rapidly increasingly its military capacity lately.

Moscow struck deals with Tajikistan and Kyrgyzstan to extend its bases till 2042 and 2032 respectively. It has announced an increase in troops in Tajikistan, its largest foreign base, from 5,900 to 9,000 soldiers by 2020.

Russia is planning to renew the fleet of its airbase at Kant, Kyrgyzstan by 2016. It has already sent a dozen of new and modified versions of Su-25 fighter jets to replace older planes.

It has been upgrading other equipment at the bases—from trucks and armoured personnel carriers (APCs) to drones.

The Central military district that oversees Russian bases in Central Asia has recently announced that it will dispatch a helicopter unit to be stationed at the airbase in Ayni, Tajikistan. Moscow has been trying to gain access to this airbase since at least 2004.

Russia has also pledged to provide $1bn to Kyrgyzstan in military aid. Tajikistan is receiving Russian military aid too, though the exact figures are not known.

The number of military drills at Russian bases in the region and joint exercises with Central Asian forces has gone up recently. Alexander Golts, a Moscow-based military analyst, says that during such drills Russia is not only training its troops but also improving contacts between political leadership, to work on the scenario of obtaining "a legitimate right" to intervene with Russian troops at the early stage of a conflict.

Moscow justifies building up a military presence in the region by highlighting the threat Central Asia and Russia are facing from Afghanistan and beyond.

"There is a growing threat that terrorist and extremist groups can penetrate into the territories that border Afghanistan," said President Vladimir Putin at the Dushanbe summit of the Collective Security Treaty Organization, a Russia-led security bloc, in September. He added that the situation was exacerbated by the presence of so-called Islamic State (IS) in Afghanistan.

Latest clashes in Kunduz, near the lengthy Afghan-Tajik border, only add to these concerns.

Mr Golts argues that it is just a matter of time before militant groups cross into Central Asia, and the Russian military is required to "hold the ground" until main forces arrive....

Dr Erica Marat from the College of International Security Affairs of the National Defense University claims that the threat of "Islamic extremism" is "inflated" and often used by Central Asian governments to crack down on political opponents. She argues that Russia is rather trying to regain its control over Central Asia.

The military co-operation concept that will be discussed at the CIS summit may provide legal means for Russia to expand its influence since it is the dominant state with the biggest army in the organization....