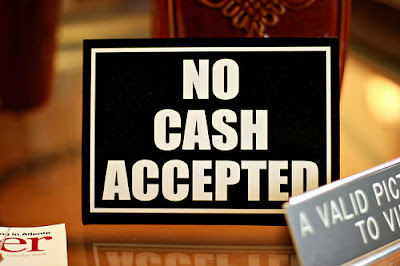 Several banks in Sweden already have 100% digitalized branches that will simply not accept cash.

(BUSINESS INSIDER)—Sweden is shaping up to be the first country to plunge its citizens into a fascinating—and terrifying—economic experiment: negative interest rates in a cashless society.

The Swedish central bank, the Sveriges Riksbank, on Wednesday held its benchmark interest rate at -0.35%, the level it has been at since July.

Though retail banks have yet to pass that negative rate on to Swedish consumers, they face increased pressure to do so as long as the rates remain where they are. That's a problem, because Sweden is the closest country on the planet to becoming an all-electronic cashless society.

Remember, Sweden is the place where, if you use too much cash, banks call the police because they think you might be a terrorist or a criminal. Swedish banks have started removing cash ATMs from rural areas, annoying old people and farmers. Credit Suisse says the rule of thumb in Scandinavia is: "If you have to pay in cash, something is wrong."...

So two trends are converging on Sweden at the same time:

And that means many Swedes have no way to "hide" their money.

So Sweden may become the first country whose citizens may have to accept negative interest rates (probably in the form of higher bank charges or fees) or be forced to spend their money to "save" it from those rates.

A resistance is forming, and some people are protesting the impending extinction of cash. Björn Eriksson, former head of Sweden's national police and now head of Säkerhetsbranschen, a lobbying group for the security industry, told The Local, "I've heard of people keeping cash in their microwaves because banks won't accept it."