Vatican and U.N. Team Up on Climate Change Against Skeptics 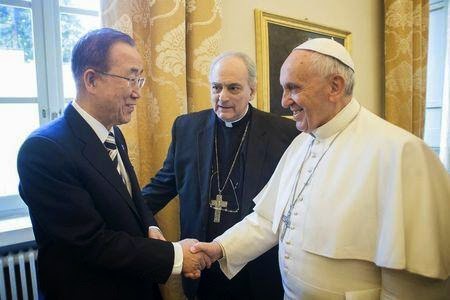 (REUTERS)—The Vatican and the United Nations teamed up to warn the world of the effects of climate change on Tuesday, coming down firmly against skeptics who deny human activities help change global weather patterns.

The pope, who is due to make a major address on sustainable development at the United Nations in September, has said he believes man is primarily responsible for climate change and is writing an encyclical on the environment....

The Heartland Institute, a Chicago think tank that says climate change is not human-induced, sent a delegation to Rome to contest the premise of the conference.

Heartland member Christopher Monckton of Britain, told reporters that the pope "should listen to both sides of the scientific argument ... not only people of one, narrow, poisonous political and scientific viewpoint".