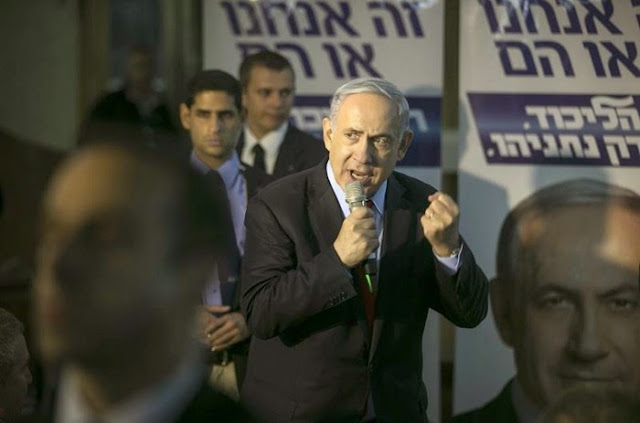 (JERUSALEM POST)—"If we do not close the gap between Labor and the Likud—Isaac Herzog and Tzipi Livni will be the prime ministers of Israel, backed by the Arabs," Prime Minister Benjamin Netanyahu said on Friday, acknowledging that it was "not at all" certain that he will retain his post after the March 17 election.

Netanyahu pegged the election as a "critical choice between two ways." During a live Q & A on his Facebook page, he said that while the leaders of the center-left Zionist Union "will make concessions all along the way, we have gained achievements while preserving the vital interests of the country."

He cautioned voters against casting their ballots for other right-leaning parties—"like Kulanu, Bayit Yehudi and Yisrael Beytenu"—which takes away mandates from his rightist Likud party. This, Netanyahu told viewers, would pave the way for Herzog and Livni to form a left-wing coalition.

He urged "everyone who wants me to be prime minister" to vote for his faction. Only then will he be able to build up the country, spur the economy and provide security for the citizens of Israel....

Netanyahu described a worldwide effort to bring down the Likud, which would put an end to the Israeli right and enter 'Tzipi and Buji' into the fray to surrender "within a minute."

He warned that the Labor leader and the Zionist Union's number two would "retreat to the 1967 borders...allow a second Hamastan [a reference to the Gaza Strip, which is controlled by Hamas] and divide Jerusalem." Whoever rejects weakness and capitulation should vote for him, he reiterated during the "live chat."

As for the makeup of a future coalition, Netanyahu called Bayit Yehudi and the ultra-Orthodox parties "natural partners" but ruled out sharing power in a national unity government with Herzog, whose merger with Livni he portrayed as "weird and dangerous."

"There is a deep fissure between us," Netanyahu concluded. "[While] they want to surrender, we want to stand tall. They bow their heads, but we hold them high."