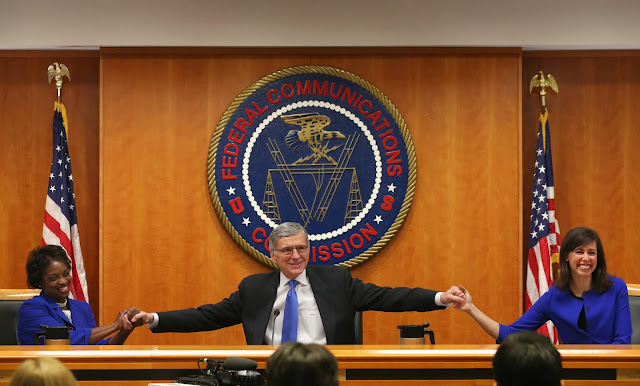 (FOX NEWS)—The Federal Communications Commission on Thursday adopted sweeping new regulations sought by President Obama for how Americans use and do business on the Internet, in a party-line vote that is sure to be challenged by the broadband industry.

The commission, following a contentious meeting, voted 3-2 to adopt its so-called net neutrality plan—a proposal that remained secret in the run-up to the final vote.

On its surface, the plan is aimed at barring service providers from creating paid "fast lanes" on the Internet, which consumer advocates and Internet companies worry would edge out cash-strapped startups and smaller Internet-based businesses. Chairman Tom Wheeler said it would ensure an "open, unfettered network."

But the rules, more broadly, would put the Internet in the same regulatory camp as the telephone by classifying it like a public utility, meaning providers like Comcast or Verizon would have to act in the "public interest" when providing a mobile connection to your home or phone.

Republican Commissioner Ajit Pai, who delivered some of the most scathing criticism of the plan Thursday, warned the policy represents a "monumental shift" to "government control of the Internet."

Further, he accused the FCC of bending to the will of Obama, who last fall came out in favor of such a sweeping regulatory plan.

Pai said the FCC was reversing course from past positions for one reason: "President Obama told us to do so."

He warned of a litany of negative consequences, intended or not, from the net neutrality plan. He said it allows rate regulation—and, ultimately, rates will go up and broadband service will slow.

Pai said that while the plan defers a decision on applying a service fee to Internet bills—much like is applied to phone bills—that surely will change.

"The order explicitly opens the door to billions of dollars in new taxes," he said. "Read my lips: More new taxes are coming. It's just a matter of when."

Further, he pointed to slower Internet speeds in Europe, which largely treats the Internet as a public utility, in warning that the additional regulation will lead to less investment and slower speeds in the U.S. as well.

"The Internet is not broken. There is no problem for the government to solve," Pai said.

Republican lawmakers, as well, blasted the proposal as an antiquated solution that would hurt, not help, Internet innovation.

"The Obama Administration needs to get beyond its 1930s rotary-telephone mindset and embrace the future," Senate Majority Leader Mitch McConnell, R-Ky., said in a statement.

While the broadband industry is expected to sue, Republicans in Congress said they will try to pass legislation scrapping the rules, although it's unlikely that such a bill would be signed into law by Obama....