Israel and Hamas found themselves in rare agreement over the participation of Palestinian leader Mahmoud Abbas in Sunday's massive anti-terror rally on the streets of Paris.

An estimated two million people took part in the march just days after Islamic terrorists killed 17 people in three separate attacks in the French capital. The event was attended by numerous foreign dignitaries and heads of state, including Israeli Prime Minister Benjamin Netanyahu and several of his cabinet ministers. 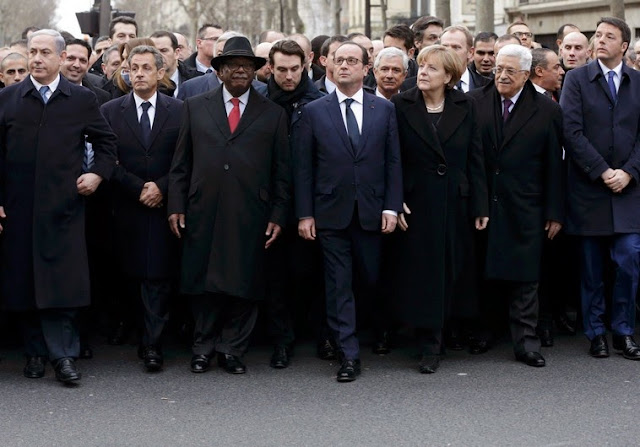 But Abbas shouldn't have been there, insisted senior Hamas leader Mahmoud al-Zahar. "Abbas wants to seem as if he's fighting terror but he doesn't know the meaning of terror," he told Arab media in remarks that were quickly picked up by the Israeli press.

Al-Zahar said that Abbas "thinks that in acting this way, he's earning the sympathy of world nations. ...This behavior is part of the hypocrisy and political acrobatics typical to Abbas."

Israeli Economy Minister Naftali Bennett, who was also present at the rally, came to a similar conclusion regarding both Abbas and the emir of Qatar.

"It's hypocritical of those same Qataris and Arabs who are financing terrorism to come and demonstrate as if against terrorism," Bennett told a Jewish youth group in Paris. "I don't accept this. They're hands are covered in blood."

It was later revealed that, in fact, it was Netanyahu whom France didn't want at the Paris rally, and that Abbas was only formally invited as a kind of slap in the Israeli leader's face.

An unnamed official in the Prime Minister's Office in Jerusalem told Israel Radio and Channel 2 News that France wanted to avoid any mention of the Israeli-Palestinian conflict, and so asked Netanyahu not to attend the historic demonstration.

Initially, Netanyahu complied with the request, but later decided that it was important for the Israeli prime minister to participate in the world's largest anti-terror protest. France quickly issued an official invitation to Netanyahu to make it appear as though he'd been welcome all along, but also highlighted that Palestinian leader Mahmoud Abbas had likewise been invited.