Why the Republicans Swept the Midterms


What the Talking Heads Are Not Telling You

In last week's midterm elections, the Republican Party scored historic victories at the national, state, and local levels of American government. Thus, the American political landscape and balance of power is vastly different today than it was before the November 4th election. While a wave election, such as what we saw last week, does not solve all of our national problems, it certainly will go a long way toward slowing down the progress of evil that has dominated our nation over the past six years.

However, very few of the pundits and politicians alike seem to understand why the election results went the way they did. What caused the wave? Was it the pragmatic influence of Karl Rove, Rove's Super Political Action Committee known as American Crossroads, and the GOP establishment that helped win the day? Hardly! In actuality, it was the influence of Bible-based voters that swung the election decisively to the right. The fact of the matter is that one out of every three voters in last Tuesday's election was a self-described "values voter." These Bible-based voters backed Republican candidates by a margin of eight to one. The Faith and Freedom Coalition issued the following press release on last Tuesday's election:

Conservative Christians made up almost one out of every three voters in the 2014 electorate, playing a decisive role in the Republican wave that resulted in control of the U.S. Senate, a record majority in the U.S. House, and critical victories in governors' races, according to a post-election survey.

The poll, conducted by Public Opinion Strategies, shows that self-identified conservative Christians made up 32 percent of the electorate and voted 86 percent Republican and only 12 percent Democrat. These voters contributed roughly 52.4 percent of all the votes received by Republican candidates...

"Conservative voters of faith were the largest constituency in the electorate in 2014," said Ralph Reed, founder and chairman of the Faith & Freedom Coalition. "Their share of the electorate exceeded that of the African-American vote, Hispanic vote, and union vote combined..."

Glen Bolger of Public Opinion Strategies, which conducted the survey, commented on the findings. "Republicans rode the wave last night to stunning victories. Waves come from a committed base and a strong showing among swing voters," Bolger said. "Voters of faith—Protestant and Catholic—are the foundation of the GOP. Without their overwhelming support, there is no GOP majority. With their support, Republicans are celebrating a high tide in the U.S. Senate, House, and around the country. [1]

If you want to credit anyone at the human level for last Tuesday's Republican electoral success, such credit belongs squarely upon the shoulders of Annise Parker, the liberal, lesbian, Democratic Mayor of the City of Houston. In a stunning turn of events, in the weeks just prior to the November election, she abused the discovery process by issuing subpoenas of the sermons and other communications of five Houston area pastors who had used their pulpits to publicly criticize her Houston Equal Rights Ordinance (HERO). This ordinance, otherwise known as the "bathroom bill," allows a man dressed as a woman to use public women's bathrooms alongside our mothers, daughters, sisters, aunts, etc ... 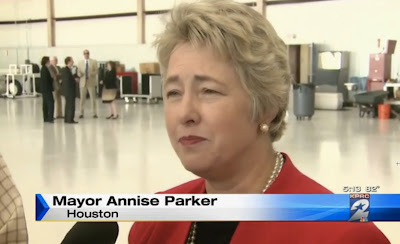 As Mayor Parker soon discovered, when you touch one pastor, you touch them all. News of this gross First Amendment violation quickly went viral and even made its way onto some national news outlets, such as Fox News' "Huckabee." The American Christian world in that instant saw exactly what Godless, liberal, humanism is like on full display. When this wicked philosophy gains political ascendancy, it almost always uses its power to persecute biblical Christianity. There it was on full display for the world to see thanks to Mayor Parker's totalitarian mindset. Consequently, the Christian public was quickly galvanized and reacted by using a tool wisely supplied to us by America's founders. All over the country, the Christian public consequently voted out of power the current political party in power, which in this case was Mayor Parker's Democratic Party.

Of course, there have been several other events that have taken place over the last several years that have also played a significant role in contributing to the awakening of the sleeping giant of American Christendom. Such events include Obamacare's persecution of Hobby Lobby as well as the plethora of cases around the country where Christian bakers and florists have found themselves on the wrong side of the law for merely declining to participate in gay weddings. However, Parker's tyrannical behavior "sealed the deal" thereby causing the Christian public to rise up and say enough is enough. Last Tuesday's landslide was the result. In short, if Tuesday's election goes down in history as playing a significant role in preventing the Obama Administration from "fundamentally transforming" America, it will turn out that it was in actuality the influence of Christianity and Christians that saved our country.

Last Tuesday's election results provide an important "teaching moment." Three lessons come to mind. First, it reveals the power that the Christian church still has to influence the direction of our civilization when it wants to. When we wake up, flex our political muscles, and exercise our legal and constitutional rights, we have the ability to send the powers that be a powerful message and knock evil back on its heels. In the wake of this victory, my hope and prayer is that the Christian world will not now fall back asleep since greater challenges inevitably lie ahead.

Second, the existence and influence of Bible-based Christianity in our culture will always serve as a natural hindrance and impediment to the triumph of the liberal agenda. Liberals themselves know this. There is a reason why Peter Jennings airs Easter specials trying to debunk the historical Jesus rather than trying to discredit Shakespeare or Muhammad. There is a reason why Christian leaders are invariably persecuted, murdered, and imprisoned within Marxist dictatorships. It is the Bible itself that condemns liberal humanism. Thus, as long as any culture is the home of enough Bible readers and believers, a built in resistance will always exist against any such leftist social agenda.

Third, there is an important message here that the Republican Party needs to hear: we Christians are the ones who put you in power. Never forget that we are not overly enamored with you. This time around, you were simply the best option at the moment for legally voicing our concerns and altering our country's political landscape. As we say in Texas, "Don't forget who brought you to the dance." Should you forget exactly who handed you this political victory thereby causing you to pursue a "Democrat-lite" or a milder progressive agenda over the course of the next two years, then you will most likely hear from us again. Should this happen, keep in mind that in 2016, the results may be very different than they were in 2014. We are watching!