Israel Expects US Attack on Syria

Israeli leaders are anticipating US military action against neighboring Syria after Western leaders appeared to accept evidence that the regime of dictator Bashar Assad had used chemical weapons against its foes, including civilian populations.

In fact, Prime Minister Benjamin Netanyahu was openly urging Washington to make good on its threat to intervene should Assad employ non-conventional weapons against his own people.

In statements to the press prior to Sunday's weekly cabinet meeting, Netanyahu and President Shimon Peres even hinted that Israel itself could strike Syria if the situation did not stabilize soon.

Peres noted that the price of allowing Syria to continue holding chemical weapons after it has proved it's willingness to use them against even internal enemies was far higher than the cost of taking forceful preemptive action. 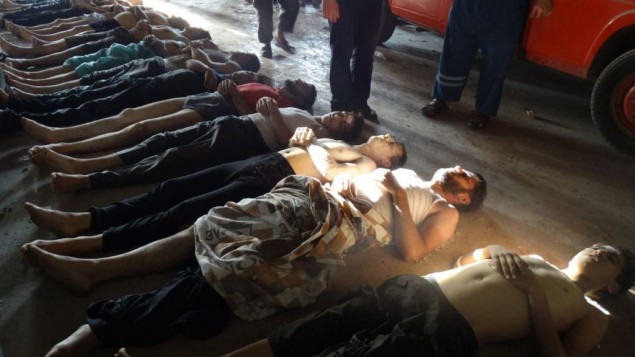 While most Israelis no doubt agreed with Peres, the prospect of open warfare with Syria caused some trepidation at home, as only 60 percent of Israelis currently possess up-to-date gas mask kits.

Meanwhile, Iran is warning America against any involvement in Syria. "Trespassing over the red line in Syria will have severe consequences for the White House," the head of Iran's Revolutionary Guard told Iranian media.

Iran is determined to keep its ally Assad in power, and views the Sunni-dominated rebel forces as a threat to its own plans of regional hegemony.

For Israel, there is no good outcome to the Syrian civil war. If Assad wins, Iran's influence in the area will continue. If the rebels win, Syria will likely descend into chaos and become a haven for all manner of radical terrorist organizations, much like what happened to the Gaza Strip and Southern Lebanon.