Israeli Forces on Syrian Border Have Been Put on Alert

Forty-six years to the week after the Six Day War of June 1967, serious new tensions are mounting on the Israeli-Syrian border, with fears rising that a major conflict between the two countries could be coming. Israeli military forces have been put on alert as violence gets closer to the demilitarized zone and after Syrian rebels seized control of a border crossing post.

"Rebels fighting the Syrian government seized the only border crossing along the Israeli-Syrian cease-fire line in the Golan Heights on Thursday, according to the Israeli military and rebel groups, forcing the United Nations peacekeeping soldiers who patrol the crossing to vacate it and bringing the Syrian conflict ever closer to Israeli-held territory," the New York Times is reporting. "Israeli forces were placed on alert along the frontier as the violence of the Syrian civil war threatened to spill over." 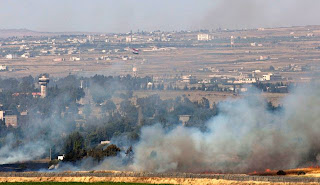 "The rebel takeover of the border crossing, Quneitra, lasted for several hours," noted the Times. "Later in the day Syrian state news media reported government forces had routed the insurgents and established control. Clashes in the area raged through much of the day. The mayhem was enough to threaten the continuation of the United Nations Disengagement Observer Force, the longtime peacekeeping mission in the sensitive and disputed area. The Quneitra crossing is patrolled by Austrian United Nations peacekeepers, who were ordered to pull back for their own safety. Later in Vienna the Austrian government said it was withdrawing its contingent from the force. Austria’s chancellor, Werner Faymann, was quoted by APA, the Austrian press agency, as saying he had spoken with Ban Ki-moon, the United Nations secretary general, and 'personally informed him about the decision.' Josephine Guerrero, a spokeswoman for the United Nations peacekeeping forces, confirmed in an e-mail message that Austria had informed the United Nations of its intended withdrawal…."

The Times also reported that "Austrians account for about 380 of the 1,000-strong United Nations force that has monitored the disengagement zone between Israeli and Syrian forces on the Golan Heights since 1974. The Philippines provides about 300 and India provides the rest. A fourth country, Croatia, withdrew its contingent earlier this year. Twice in recent months a rebel group has taken groups of the Filipino peacekeepers captive, releasing them unharmed after several days. The Philippine government has been considering pulling its peacekeepers out of the area. Israel’s Foreign Ministry issued a statement expressing regret over Austria’s decision and said it hoped the Austrian withdrawal would 'not be conducive to further escalation in the area.' The statement also said Israel expected the United Nations to maintain the peacekeeping force under the Security Council resolution that created it four decades ago…."

"Israel has repeatedly declared that it has no intention of getting involved in the Syrian civil war but that it will act to protect its own interests," reports the Times. "Israel's minister of defense, Moshe Yaalon, said this week that Israel would not tolerate the transfer of advanced weapons from the Syrian government to Hezbollah, the Lebanese militia; a loss of Syrian government control over chemical weapons; or a heating up of the Golan frontier and a spillover of fire into Israeli-held territory. Tensions have risen between Israel and Syria after three airstrikes on Syrian soil this year that targeted advanced weapons and were attributed to Israel. There have been numerous instances of fire spilling over into the Israeli-held Golan Heights. The Israeli military said that much of it was assumed to be stray fire. But last month, Syria acknowledged it had intentionally attacked an Israeli target, a military vehicle that was shot at as it patrolled the cease-fire line. Syria said the jeep had crossed into its territory on the Golan Heights, which Israel denied. In that instance and others, Israeli tanks have fired back several times at Syrian positions."