A Sweeping Decision in the DOMA Case

The Supreme Court just struck down section 3 of the Defense of Marriage Act, which defined marriage as the union of one man and one woman. In doing so, the court issued a sweeping judgment that in my view will lead to a constitutional right to gay marriage in very short order. One test case should do the trick. 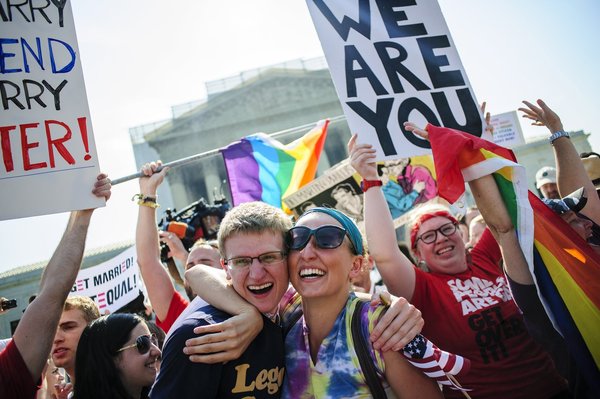 Justice Kennedy wrote the majority opinion, and there are some elements in it that are chilling—as Justice Scalia makes clear in his scathing dissenting opinion. The Court's majority holds in contempt anyone who defines marriage as the union of one man and one woman. Scalia writes:

The Court…accuses the Congress that enacted this law and the President who signed it of something much worse… The majority says that the supporters of this Act acted with malice—with the "purpose" … “to disparage and to injure” same-sex couples. It says that the motivation for DOMA was to “demean,” … to “impose inequality,” … to “impose . . . a stigma,” … to deny people “equal dignity,”… to brand gay people as “unworthy,”… and to “humiliat[e]” their children, …

I am sure these accusations are quite untrue. To be sure (as the majority points out), the legislation is called the Defense of Marriage Act. But to defend traditional marriage is not to condemn, demean, or humiliate those who would prefer other arrangements, any more than to defend the Constitution of the United States is to condemn, demean, or humiliate other constitutions. To hurl such accusations so casually demeans this institution. In the majority’s judgment, any resistance to its holding is beyond the pale of reasoned disagreement. To question its high-handed invalidation of a presumptively valid statute is to act (the majority is sure) with the purpose to “disparage,” “injure,” “degrade,” “demean,” and “humiliate” our fellow human beings, our fellow citizens, who are homosexual. All that, simply for supporting an Act that did no more than codify an aspect of marriage that had been unquestioned in our society for most of its existence—indeed, had been unquestioned in virtually all societies for virtually all of human history. It is one thing for a society to elect change; it is another for a court of law to impose change by adjudging those who oppose it hostis humani generis, enemies of the human race. (p. 21 of Scalia's dissent)

Rod Dreher’s characterization is on point:

And the logic of the Court’s language here ought to put fear into the hearts of anyone who does not share the belief that homosexuality is morally neutral, or morally good. The Supreme Court says we are haters, full stop. You know the liberal mind: thought-crime cannot be allowed to exist. How can the federal government maintain a tax exemption for churches that hew to the Biblical teaching on homosexuality, given that the Supreme Court now has put opposition to homosexuality in the same category as racism? We live in interesting times.

I will have more to say on this as the day wears on, but the Court’s decision on DOMA is a watershed on the order of Roe v. Wade. It will have religious liberty implications that I’m guessing most folks have not even begun to ponder.