By David James
The Alliance for Biblical Integrity

Over the past year, The Harbinger and its author, Jonathan Cahn, have experienced an almost unprecedented rise to prominence, influence and fame in America by a Christian book and author. Its status as the #1 Christian book for 2012, with over 75 weeks on the New York Times bestseller list and one million copies sold is impressive by any measure.

The Harbinger has struck a chord with many Christians because of its call to repentance in the face of present or impending judgment by God. Cahn claims this judgment is evidenced by a series of events which began with the terrorist attacks of 9/11/2001 and which have continued since then, following what he says is a "template" found in Isaiah 9:10. The case the author presents for parallels between events in ancient Israel and present-day America has persuaded many that it is impossible for this correspondence to be mere coincidence and therefore it must be a message from God, making it a "must-read."

Ultimately, the level of The Harbinger’s success can be attributed largely to the support and promotion from a wide array of ministry leaders who have also become convinced that God is using Cahn as a prophetic voice and who have combined constituencies numbering in the millions. Jonathan Cahn has been interviewed countless times, with one writer referring to him as "one of the most interviewed Christians in America," [1] and has appeared (sometimes multiple times) on some of the most highly watched programs on Christian television such as The Jim Bakker Show with Jim and Lori Bakker, The 700 Club with Pat Robertson, It’s Supernatural with Sid Roth, Prophecy in the News with Gary Stearman, This is Your Day with Benny Hinn, Praise the Lord on TBN and many others. Last year he was interviewed on two consecutive days by Glenn Beck, and within the last few weeks he has been interviewed on the radio by former Gov. Mike Huckabee of Fox News and also by Dani Johnson (Secret Millionaire).

However, there has also been a significant amount of controversy within the Body of Christ over The Harbinger and Jonathan Cahn as not everyone has shared this enthusiasm for the book. That such a book would generate at least some controversy isn't entirely unusual in today's theological climate. However, what is unusual regarding this particular controversy is the sharp division within the evangelical community.

Although I wrote The Harbinger: Fact or Fiction? as a critique and response to The Harbinger, I am definitely not alone in my criticism of the book. A good number of conservative Bible teachers, pastors and theologians have also expressed their deep concerns about various issues related to the message of the book and its author. The critics of The Harbinger include many respected men and women in the conservative evangelical community such as (the late) Roy Zuck, Gary Gilley, T.A. McMahon, Jimmy DeYoung, Larry DeBruyn, Ken Silva, Danny Isom, Paul Barreca, Sarah Leslie, Gaylene Goodroad, Chris Lawson, Brannon Howse, Tommy Ice, Keith Gibson, Berit Kjos, and Susan Puzio to name a few.

Compounding the controversy has been the deep division caused by some very emotional articles aimed at critics of The Harbinger, with very little response to the actual substance of our critiques. One example of just how personal this has gotten at times is the following from a blogger who says of The Harbinger’s critics:

…you fit the bill as the modern version of the Sanhedrin, the Catholic Inquisition, and every man-made religious construct of destruction that the human race has ever erected against the face of God to obstruct His purposes and persecute His servants in the name of God and now in the last two thousand years—in the name of Christ.

Despite this, we have tried to stay focused on The Harbinger and deal exclusively with the teaching and views of Jonathan Cahn as presented in his book, interviews and messages. In doing so, we have chosen to say very little about those who have so strongly supported and promoted The Harbinger and its author, and who have also leveled some serious personal accusations against those with concerns. However, with The Harbinger phenomenon showing few signs of letting up, it seems that the time has come to begin to address not only the specific issues at hand, but also some of what has been said about those who have been critical of the book because in many ways it has just gotten out of hand. 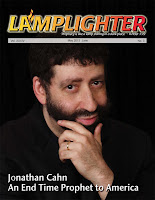 On the front cover of the latest edition of his magazine, Lamplighter, Dr. David Reagan suggests that Jonathan Cahn is "an end-time prophet to America." This cover is consistent with the fact that he has been repeatedly referred to as a prophet in many interviews, articles and promotions. And although Jonathan Cahn denies that he has ever personally called himself a prophet, I am not aware of any time when he has denied he is a prophet or corrected someone who has introduced him as a prophet. Rather he has always accepted that appellation the many times it has been used of him.

Then, in an article titled "In Defense of a Prophetic Voice," Dr. Reagan launches a fairly serious attack against the critics of The Harbinger. This is a response to that article (although this response could be generally directed to many who have supported The Harbinger and defended Jonathan Cahn and have said many of the same things.)

As I have followed The Harbinger controversy, I have tried to read everything that has been written about the issue, both positive and negative. What I have found is that theological liberals have been almost uniformly silent about The Harbinger. Although one might expect that it would provoke a response from some in mainstream denominations or from some emerging church leaders, I don’t recall reading anything specific from them. This makes the opening quote in Dr. Reagan’s article both puzzling and troubling:

Since the normal "pillow prophets" have said virtually nothing about The Harbinger, to whom, then, could Dr. Reagan be referring except the theologically conservative evangelical critics of the book?

In like manner, Jonathan Cahn has been the victim of irresponsible and vicious attacks. He has been accused of "parading as a prophet." Others have branded him a "false prophet." These charges are reckless, unwarranted and un-Christ-like.

So, apparently anyone who has criticized The Harbinger falls into the category of "pillow prophet" (or at least in the category of "those who love pillow prophets"). However, anyone who has followed this controversy knows that no one could reasonably suggest that The Harbinger’s critics are the type of "pillow-prophets" he describes. This is a very hollow charge that has no basis in fact.

Another problem is the accusation that these "pillow-prophets" have subjected Jonathan Cahn to "irresponsible and vicious attacks." With few, if any, exceptions the vast majority of critiques have focused only on the issues and have purposefully avoided personal attacks. I don’t think any of the primary, more well-known critics have said or written anything that could be characterized as anything close to "irresponsible" or "vicious."

These charges raise the question of whether Dr. Reagan has actually read some of the more significant critical reviews of The Harbinger. Has he actually considered the substance of our concerns? Has he read The Harbinger: Fact or Fiction?

Dr. Reagan goes on to say:

Jonathan Cahn’s message is thoroughly biblical. It is not based on any new revelation from God. Rather, it is based on the biblical principles that govern God’s relationship with nations.

This is quite a gloss that overlooks a number of serious issues.

For example, the most important principle of biblical interpretation is to never lift a verse from its context. If the context is not considered, it is impossible to understand a passage correctly. However, this is precisely what Jonathan Cahn has done with Isaiah 9:10. Although, the nine verses which precede Isaiah 9:10 represent one of the most important Messianic Kingdom passages in the entire Old Testament, they are completely ignored in The Harbinger. Neither are the following verses considered. How is it that a single verse in the middle of a chapter with twenty-one verses is a template for events which have happened in America and the other twenty verses have no connection whatsoever? If just 9:10 is a template, why not the entire chapter? And if not the entire chapter, why 9:10? Surely a Bible teacher like Dr. Reagan realizes just how serious this problem really is. It is difficult to understand how he can suggest that The Harbinger’s message is "thoroughly biblical."

And this only begins to scratch the surface. Another issue is Cahn's speculation concerning the Sh'mitah (Israel’s Sabbath year). He claims that America experienced a judgment (or at least a warning) from God in both 2001 and 2008, tied to the Hebrew Sabbath year in the form of stock market crashes. To suggest that God is using the Sh’mitah as a basis or principle of judgment against any nation except Israel is thoroughly unbiblical. What about 1994, 1987, 1980, 1971….? Why did it begin in 2001 and without any warning that we, as a Gentile nation, were obligated to the Sh’mitah? This isn't the way God does things. And beyond this, in terms of percentage, neither of these crashes even rank in the top ten crashes. There wasn't anything approaching a total collapse as happened in ancient Israel.