In the center of Jerusalem is a government-built monument made out of old rifles, swords and plowshares. An inscription under it from the prophet Isaiah declares that in the Messianic era, all weapons of warfare with be beaten into implements of agriculture. However in this era, Israel has become known internationally for being one of the most prolific countries on earth in the production of hi-tech weaponry. This is naturally mainly due to the fact that the small Jewish state is surrounded by many hostile countries that have waged periodic wars against it, with the declared goal of wiping Israel entirely off of the world map.

Now a new report has found that Israel has become the number one exporter of pilotless drone attack and surveillance aircraft on earth. The report, issued by a major military industry consultancy firm, said that Israeli sales of unmanned drone aircraft has totaled nearly five billion dollars in just the past eight years alone. The report says this amounts to around ten percent of Israel’s total defense exports, which have now reached over six billion dollars a year. 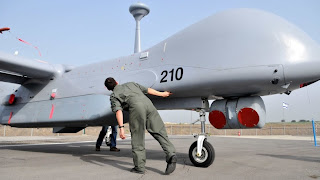