...meets with top leaders in the epicenter, while Kerry decides to skip Israel on 1st trip to Mideast as Secretary of State. 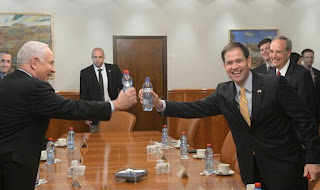 A study in contrasts?

Senator Marco Rubio, possibly a presidential contender in 2016, is in Israel today.

Yet former Senator John Kerry—once a presidential candidate, and now the Secretary of State—is heading to the Middle East next week but has decided to skip visiting Israel.

What should one make of this?

"Prime Minister Binyamin Netanyahu on Wednesday thanked US Senator (R-FL) Marco Rubio for American 'bipartisan support for our security and our quest for peace,'" reports the Jerusalem Post. "Rubio responded [by] saying that Israel 'lives in a challenging neighborhood but the Israeli-American relationship is one of the most important ones we have.' He stated that he was 'pleased' that US President Barack Obama was visiting Israel in March, adding 'certainly our commitment to that partnership is bipartisan and it should remain that way.'"

"Rubio met Monday with King Abdullah II in Jordan along with other members of the Jordanian government to talk about the Syrian war and the economic and security cooperation between the United States and Jordan," reports ABC News. "Rubio also met with former Syrian Prime Minister Riad Hijab, who defected to Jordan last year. This marked Rubio’s first ever trip to Jordan."

"Secretary of State John Kerry will make his first official trip overseas next week, a jam-packed travel agenda that includes meetings in nine nations across Europe and the Middle East—but there will be no stops in Israel or the Palestinian territories," reports the Times of Israel. "State Department spokeswoman Victoria Nuland says Kerry is bypassing Jerusalem and Ramallah while Israeli political parties continue to form a government after recent elections. Kerry departs February 24. He will visit close US allies and partners: Britain, Germany, France, Italy, Turkey, Egypt, Saudi Arabia, United Arab Emirates and Qatar. His diplomacy will focus on the conflicts in Mali, Syria and Afghanistan."