Israeli fighter jets attacked an unknown target along the Syria-Lebanon border overnight, according to Western security and diplomatic sources cited in the Israeli, Arab and mainstream medias.

One diplomat told Reuters correspondent Dan Williams that "there was definitely a hit in the border area."

That revelation came just hours after Lebanese army officials had confirmed the penetration of their airspace by Israeli jets several times in recent days.

The Israeli fly-overs and the reported attack are believed to be connected to the monitoring and prevention of Hezbollah smuggling operations along the border. 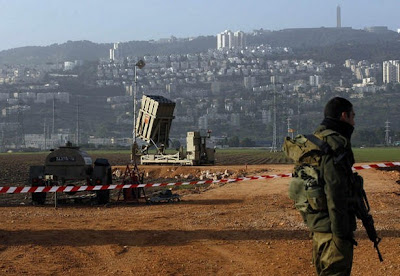 Israel has deployed two of its vaunted Iron Dome anti-missile systems to the northern port city of Haifa should the situation spiral out of control.

Israel's Home Front Command reports that it is receiving triple the usual number of requests for gas masks.