How Significant Is Our National Debt, and What Are Its Implications?

I have pointed out before that one thing Republican and Democratic administrations have in common is their apparent unwillingness to do what it takes to balance our budget.

Look at what the Lord told Israel:

So lending is part of being blessed. What’s involved in being cursed?

"Some were saying, 'We and our sons and daughters are numerous; in order for us to eat and stay alive, we must get grain.' Others were saying, 'We are mortgaging our fields, our vineyards and our homes to get grain during the famine.' Still others were saying, 'We have had to borrow money to pay the king's tax on our fields and vineyards. Although we are of the same flesh and blood as our fellow Jews and though our children are as good as theirs, yet we have to subject our sons and daughters to slavery. Some of our daughters have already been enslaved, but we are powerless, because our fields and our vineyards belong to others'" (Nehemiah 5:2-5).

A Biblical Perspective on National Debt

This post from Lorne Blackman has some insightful thoughts about America’s debt:

For 30 years I have watched with astonishment as our nation has sunk ever deeper into debt, even during times of peace and prosperity. A long, sorry procession of so-called "debt ceilings," pay-as-you-go rules, and balanced budget proposals have all failed miserably, with each being promptly discarded the moment it threatens to actually reduce spending. 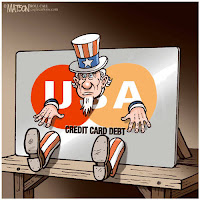 Today, having achieved the shameful distinction of world’s greatest debtor nation, we project massive trillion dollar federal deficits to continue indefinitely. Yet every effort to trim deficits, even by just a few percent, generates a national political crisis. Our president ignores the recommendations of his own debt commission. To Washington politicians and the media, "deficit reduction" now means annually accruing massive additional debt forever, just at slightly less than this year’s unprecedented rate of $1.6 trillion.

We wonder why this is allowed to continue. A socialist president? An irresponsible Congress? Greedy special interests? Too many on the federal dole? Yes to all of the above. But the truth is that political efforts to control debt fail because chronic deficits are not merely a political problem. They represent a spiritual problem.

A recent survey revealed that maintaining current levels of government benefits was far more important to Americans than controlling the growth of the debt problem. It seems we have reached a grave turning point in our national character, one which our Founders predicted would spell the end of liberty as we have known it: Americans crave security and entitlements more than they love liberty. We covet benefits for which we have not labored. We elect representatives who mock their Constitutional oaths by dishonoring the very principles they swear to uphold. Our lust for entitlements and our shameful envy of centralized European systems have produced a massive, uncontrollable bureaucracy that enslaves the people with debt, regulation, and intergenerational social dependency. And yet we seek ever more federal intervention—in health care, in foreign conflicts, in bank bailouts, in corporate bailouts, in state government bailouts.

The corrupting influence of federal plunder has rendered us a nation of competing interest groups: retirees, farmers, minorities, the rich, the poor, local governments, public employee unions, corporations, global interventionists, and multitudes of so-called "charities" and corrupt "health care" and "community" organizations. The federal government has degenerated into the agent of these plunder groups which take whatever they can by means of congress, the executive, or the courts. We have become a nation of hypocrites, extolling our compassion for the children as we lay up for them a heritage of perpetual debt, taxation and insolvency.

Our self-destructive behavior poses fundamental questions: Have government giveaways irreparably corrupted the character of the people? Has the Great Experiment failed? Can Americans, addicted to entitlements and laden with debt, still legitimately be considered a free and self-governing people?

(Read the rest of the article).

Someone sent me this video. It isn't an exciting narration, but I would be interested if anyone, of any political persuasion, can refute the claims made in this video. I honestly hope you can.