Are We on the Eve of the Next Civil War?

I expect 2013 to be an interesting year.

And while I expect to have a very profitable year with my investments and businesses, I can’t seem to shake this nagging suspicion that 2013 may also be one of the most devastating years in American history. Sadly, our nation has become a shadow of its former self. In times past, Americans were often admired by other nations for their strange blend of self-reliance and self-sacrifice. Today, however, Americans have become victims of their own success.

In the not-too-distant past, we were a people who made things. We were a nation of producers and relied heavily upon global consumers to purchase our well-made exports. Today, America’s specialty is consumption and our number one export is a worthless piece of paper known as the U.S. dollar.

What happened to America? How did a nation that was so prosperous and so unique in its approach to government end up completely bankrupt and run by tyrants?

It is nothing new. In fact, as the wise King Solomon once said: "There is no new thing under the sun." In his immense wisdom he added that the thing that "was" is the same thing that is "to come."

The chaos and confusion that surrounds us is a fog that is induced from an empire in decline. No nation remains on top forever. Deep down, we all know this to be true. But denial is a primitive and very natural human reaction.

Today, our country is literally being ripped apart by power-hungry warring political factions. They each come disguised behind their well-prepared talking points emphasizing "peace," "sanity," "morality" or just "fill-in-the-blank." But their ultimate goal is a power grab. And they attempt to recruit you through the help of their friends in the corporate-controlled media to cheer them on as they engage in a vain quest for more power.

But we are not surprised. After all, politicians have always believed that the only thing wrong with the world is that they are not running it.

The American people have been sheared like sheep. Ironically, America’s prized virtue of rugged individualism appears to have left them incapable of meaningful and convincing collective power. Their demands for accountability from their political leaders has been muted by their realization that in their abundance, they too are motivated by excess.

As long as the powers-that-be maintain a "present is the minimum" attitude, they are able to keep the disillusioned at bay.

It is simply amazing how corrupt the American experiment has become over the last several decades.

Here’s a brief list of just some of things that have Americans upset.

Are We On the Eve of the Next Civil War?

Many among the disillusioned masses are keenly aware that the democratic process has been hijacked by special interests and corporate lobbyists. When the ballot box no longer produces peaceful change, history tells us that the masses turn to violent force to exact their will.

Consider the nation’s reaction to the tragic events last month at an elementary school in Newtown, CT, where 26 people perished at gunpoint, 20 of which were small children. This tragedy inspired a flood of fresh gun sales. In fact, the number of FBI background checks required before an individual can buy a gun broke a new record in the month of December.

According to the FBI, 2.78 million instant background checks were conducted during the holiday month. That’s up a dramatic 49% since December 2011. The previous record was set in November 2012 with 2.01 million background checks being conducted.

Background checks increased in all 50 states in the month of December.

The top five states that saw the largest December increases were: 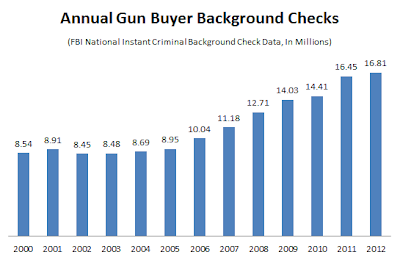 As you can see in the chart above, the number of annual FBI background checks has doubled since 2003.

Of course, these numbers do not include the number of guns sold through gun shows, which currently offer buyers a loop-hole to avoid the mandatory background check. Roughly 40% of all guns sold annually occur at gun shows.

The recent jump in reported gun sales is actually part of a much larger trend that began back around 2005. It may surprise gun control advocates that gun ownership in America is down dramatically from where it was back in the 1970’s and 1980’s. According to the University of Chicago, 54 percent of American households owned guns in 1977 compared to just to 32 percent in 2010.

Obviously, the American people are mad at government incompetence. They are fearful of increasing violence. They are concerned about their financial future. And they have lots of guns, some of which are semi-automatic guns that can spray dozens of rounds in a very short time frame.

Meanwhile, the Federal government continues to provoke the national rage through aggressive and tyrannical acts of overreach.

Last summer, shocking news broke that the Department of Homeland Security (DHS), the Social Security Administration (SSA), and the National Oceanic and Atmospheric Administration (NOAA) had placed an order for hundreds of millions of hollow tipped bullets. For those unfamiliar with ammunition terminology, these are the kind of bullets that you buy when you want to kill with one shot. In fact, they are so deadly that they have been outlawed by the Geneva Convention for use in war.

When you couple all of this information with the fact that the U.S. military has been engaging in an increasing number of military exercises in urban areas around the country, it can cause one to wonder.

The American people are angry and feeling woefully unrepresented. Only 10% of the population has a favorable view of Congress. And the reigning government appears increasingly tyrannical and aloof as to the people’s concerns.

Is it just me, or does this sound like it could be 1776 or 1861 all over again? Only this time, instead of muskets and blackpowder guns, the people are armed with semi-automatic weaponry.

The economic crisis facing America only aggravates our current problems. When the inevitable austerity is imposed upon the American citizenry, how will they respond? Just think about how Americans have reacted in natural disasters like Hurricane Katrina, or more recently, Hurricane Sandy. Also, consider the widespread protests that broke out across Europe when austerity measures were imposed.

Fast forward 10-20 years into the future after the Federal government has completely destroyed the currency and has failed to keep its promises through its many entitlement benefits.

Admittedly, it is hard to imagine such a scenario in our own country. But it has happened before. And if King Solomon’s wisdom is correct, it can likely happen again.