Is Les Miserables a "Christian" Film?

The most common contemporary Hollywood movie theme is revenge. So many movies are driven by the energy of "an eye for an eye, and tooth for a tooth." Helen and I attended the musical film version of Les Miserables. I will let others comment on the actors and the singing, for I wish to comment on how clearly the themes of God’s grace and forgiveness came forth from the screen. Because music is the language of the soul, the songs riveted lyrics to melody, leaving us spellbound and at times in tears—not only at the music, but at the message it conveys! 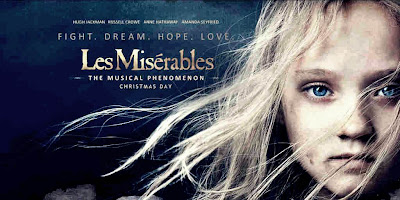 The story recounts the parole of Jean Valjean who spent 19 years in hard labor for stealing a piece of bread for his sister’s hungry child. Make no mistake—the film is grimy and ugly in its portrayal of human depravity, but it is out of that ugliness that the message of God’s grace shines even more brightly. Valjean believes that he is a permanent criminal, but that all changes when he meets a priest who ministers to him the liberating grace of God. Yet, while grace liberates, it also commissions. Valjean is to use the priest’s gift of the silver (actually stolen by Valjean) to only do good.

Grace and forgiveness effect a change of character in Valjean and he becomes a successful, wealthy, and good man. He finds and cares for Cosette, the daughter of an abused, single mother, Fantine. Javert, the intensely "just" and law-abiding, justice-demanding inspector, relentlessly tracks Valjean down. To use the words of the Biblical James, the movie shows through Valjean how "mercy triumphs over judgment" (James 2:13). "To love another person is to see the face of God" is the final refrain that remains in the memory.

We watch and listen to Valjean singing prayers of penitence and confession as well as prayers of guidance and intercession. During the violent clash of students and the military, Valjean prays for the survival of Marius, a young man with whom Cosette had fallen in love. The song, "Bring him home," has always been very moving—and it continues to be so in this version.

Both Valjean and Javert come from criminal backgrounds, and Javert chooses to enforce the strict letter of law in his worldview of justice in every case. On the other hand, Valjean knows that he was thrown upon the mercy of God and he seeks to live that out, even in relations with his enemies. Time and again Valjean shows mercy to Javert, yet Javert cannot receive grace and cannot believe in mercy. Javert does not believe that people can really change. Rather than live as a recipient of mercy, he takes his own life. He chooses against the grace of God.

No doubt some of my evangelical friends will not be able to get their theological minds around grace being conveyed in a Roman Catholic context. I think, however, that the message of James that real faith produces real deeds of mercy and kindness is what is operating in this story. What if we adopted a grace-oriented, forgiveness-offering attitude to others? Isn’t that why God became flesh and dwelt among us ("full of grace and truth" John 1:14c)?

If forgiving love is the fulfillment of the Law—and Jesus, Paul, and James say that it is—then we need to shout from the roof-tops, "Go see Les Miserables! It’s what the Christian life should be about!"

PG Alert! The bawdy "Master of the House," starring His Majesty’s Bawdiness, Sasha Baron Cohen, exemplifies the moral ugliness among the "miserable ones" in the title. The same must be said about the moral cesspool into which Fantine descends at the beginning of the film. But all of this provides the ugly tapestry from which emerges the beauty of Valjean’s grace and mercy.