"The government is ultimately responsible for whether or not Jews can pray on the Temple Mount, not the Jerusalem municipality," Barkat told students at a religious high school. "My opinion is that everyone should be able to pray there." 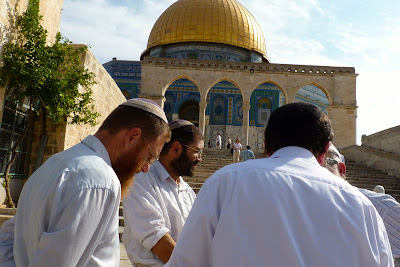 Despite being the holiest site in the world to Jews and many Christians, none but Muslims are permitted to pray atop Jerusalem's Temple Mount.

Technically, anyone can pray there, but threats of Muslim violence have resulted in a police policy forbidding Jews and Christians from even mouthing prayers while visiting the Temple Mount.

Despite the ban, a growing numbers of Jews have been saying quiet prayers while visiting the Temple Mount, and many have been arrested for doing so as a result of Muslim authorities complaining to police.

The Muslims claim Jerusalem's Temple Mount as an "Islamic Trust," and therefore view "infidel" prayers as desecrating a site holy to them. Local Muslims have in the past responded with deadly violence to visits to the Temple Mount by prominent Jewish leaders.