The Mourdock Moment: Life, Death, and Lies on the Campaign Trail

The controversy over comments made by U.S. Senate candidate Richard Mourdock reveals the undeniable ugliness of American politics. At the same time, the media firestorm underscores the importance of getting the pro-life position right—and expressing it well. 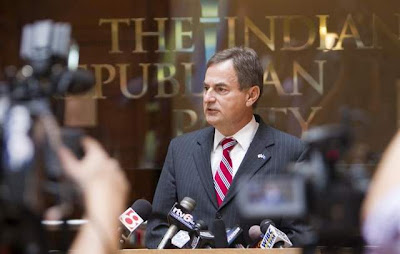 Mourdock, the Republican nominee for the U.S. Senate in Indiana, was debating his opponent, Rep. Joe Donnelly, this past Tuesday night, when the issue of abortion emerged. Both candidates claimed to affirm that life begins at conception, but Mourdock called for the end of abortion on demand. He then extended his remarks with these words:

"This is that issue that every candidate for federal, or even state, office faces, and I too stand for life. I know there are some who disagree and I respect their point of view and I believe that life begins at conception. The only exception I have [for abortion] is in that case [where] the life of the mother [is threatened]. I struggled with it for a long time, but I came to realize that life is a gift from God. And I think even when life begins in that horrible situation of rape that it is something that God intended to happen."

Immediately, Mourdock was charged with claiming that God intended a rape to happen. A spokesperson for the Obama campaign said that President Obama "felt those comments were outrageous and demeaning to women." Democratic operatives and media voices denounced Mourdock as hateful, extremist, and worse, and even many of his fellow Republicans scattered and ran for cover. Some demanded that Republican presidential nominee Mitt Romney should pull an ad supportive of Mourdock.

A closer look at Mourdock’s comments reveals that the candidate was not in any true sense calling rape "something that God intended to happen." Everything Mourdock said in that answer flowed from his stated presupposition that life begins at conception, and that every human life is a gift from God.

Nevertheless, the liberal media went into full apoplexy, painting Richard Mourdock as a woman-hating extremist with reprehensible views on an issue as serious as rape.

Almost none of those who quoted Mourdock in making these charges used the full quotation, much less the audio of its delivery in the debate. The full quote reveals that the candidate was affirming the full dignity of every human life, regardless of the circumstance of conception.

To their credit, some in the media saw through the controversy. Writing for The New Republic, Amy Sullivan made clear that she disagrees with Mourdock’s position, but she honestly explained his words, and she expressed disappointment in his treatment by many liberal commentators.

"Despite the assertions of many liberal writers I read and otherwise admire, I don’t think that politicians like Mourdock oppose rape exceptions because they hate women or want to control women. I think they’re totally oblivious and insensitive and can’t for a moment place themselves in the shoes of a woman who becomes pregnant from a rape. I think most don’t particularly care that their policy decisions can impact what control a woman does or doesn’t have over her own body. But if Mourdock believes that God creates all life and that to end a life created by God is murder, then all abortion is murder, regardless of the circumstances in which a pregnancy came about."

She is exactly right, and bravely so.

"I came to realize that life is that gift from God. And...even when life begins in that horrible situation of rape, that it is something that God intended to happen."

The key word here is "it." I think it’s pretty clear that Mourdock is referring to a life that is conceived by a rape. He is not arguing that rape is the something that God intended to happen."

Amy Sullivan also acknowledged that Mourdock’s position is "a fairly common theological belief." Her candor and honesty were refreshing exceptions to most of the coverage.

Similarly, Kevin Drum, writing in the liberal journal Mother Jones, also registered his disagreement with Mourdock’s argument. Nevertheless, he was bold to ask the obvious—"can’t we all acknowledge that this is just conventional Christian theology?" He added, "What I find occasionally odd is that so many conventional bits of theology like this are so controversial if someone actually mentions them in public."

Both Drum and Sullivan described Mourdock’s argument as a form of theodicy, meaning a defense of God that points to good coming out of evil. They are certainly right to identify this argument as germane to the context of rape and pregnancy, but Mourdock did not actually go so far as to make the argument.

The controversy over his statements reveals the irresponsibility of so many in the media and the political arena. The characterizations and willful distortions of Mourdock’s words amount to nothing less than lies.

At the same time, Mr. Mourdock is responsible for giving the media and his political enemies the very ammunition for their distortions.

The debate question did not force Mourdock to garble his argument. The cause of defending the unborn is harmed when the argument for that defense is expressed badly and recklessly, and Mourdock’s answer was both reckless and catastrophically incomplete.

The issue of exceptions that might justify an abortion cannot be discussed carelessly. Furthermore, any reference to rape must start with a clear affirmation of the horrifying evil of rape and an equal affirmation of concern for any woman or girl victimized by a rapist. At this point, the defender of the unborn should point to the fact that every single human life is sacred at every point of its development and without regard to the context of that life’s conception. No one would deny that this is true of a six-year-old child conceived in the horror of a rape. Those who defend the unborn know that it was equally true when that child was in the womb.

No doubt, Mourdock meant to express this point, but his words fell far short of an adequate expression of the argument. In his political situation, that failure might be fatal. In terms of the cause of defending life, his garbled argument makes the task more difficult.

And yet, this controversy was really not about a failure of communication. Behind it all is the great chasm that separates those who defend the sanctity of life and those who defend abortion on demand. With that in mind, how should the defenders of life think about exceptions that might justify an abortion?

One truth must be transparently clear—a consistent defense of all human life means that there is no acceptable exception that would allow an intentional abortion. If every life is sacred, there is no exception.

The three exceptions most often proposed call for abortion to be allowed only in cases of rape, incest, or to save the life of the mother. These are the exceptions currently affirmed by Mitt Romney in his presidential campaign. What should we think of these?

First, when speaking of saving the life of the mother, we should be clear that the abortion of her unborn child cannot be the intentional result. There can be no active intention to kill the baby. This does not mean that a mother might, in very rare and always tragic circumstances, require a medical procedure or treatment to save her life that would, as a secondary effect, terminate the life of her unborn child. This is clearly established in moral theory, and we must be thankful that such cases are very rare.

Next, when speaking of cases involving rape and incest, we must affirm the sinful tragedy of such acts and sympathize without reservation with the victims. We must then make the argument that the unborn child that has resulted from such a heinous act should not be added to the list of victims. That child possesses no less dignity than a child conceived in any other context.

How should we think of these questions in light of our current cultural and political context? We must contend for the full dignity and humanity of every single human life at every point of development and life from conception until natural death, and we cannot rest from this cause so long as the threat to the dignity and sanctity of any life remains.

In the meantime, we are informed by the fact that, as the Gallup organization affirmed just months ago, the vast majority of Americans are willing to support increased restrictions on abortion so long as those exceptions are allowed. We should gladly accept and eagerly support such laws and the candidates who support them, knowing that such a law would save the life of over a million unborn children in the nation each year.

Can we be satisfied with such a law? Of course not, and we cannot be disingenuous in our public statements. But we can eagerly support a law that would save the vast majority of unborn children now threatened by abortion, even as we seek to convince our fellow Americans that this is not enough.

We must argue for the dignity, humanity, and right to life of every unborn child, regardless of the context of its conception, but we must argue well and make our arguments carefully. The use and deliberate abuse of Richard Mourdock’s comments should underline the risk of falling short in that task.