The Harbinger: Fact or Fiction?

By David James
The Alliance for Biblical Integrity

Does Isaiah 9:10 Really Contain an Ancient Mystery that Holds the Secret to America's Future?

Messianic rabbi Jonathan Cahn begins The Harbinger with these words:

"What you are about to read is presented in the form of a story, but what is contained within the story is real."

The author's real message is a warning and call for repentance to America based on actual signs he believes are to be found in Isaiah 9:10 and which he believes have been reappearing in America, beginning with the terrorist attacks of September 11, 2001. Cahn explains that this constitutes "an ancient mystery that explains everything from 9/11 to the collapse of the global economy." He contends that the match-up between Isaiah and recent events in the United States is so precise that they are unmistakable evidence that God is trying to get our attention. This is ahead of God's final judgment because of America's departure from the Christian vision and values of the Founding Fathers. 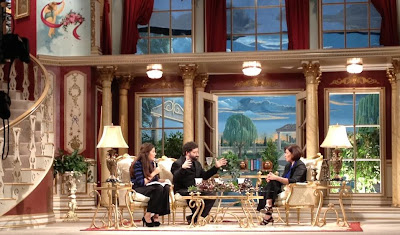 True, the United States has broadly turned its back on God and there is a corresponding need for repentance from personal to the national level. And it could well be that God is already judging America or He may very soon if we continue on our present course. However, The Harbinger dramatically fails to demonstrate that Isaiah 9:10 contains "an ancient mystery that holds the secret of America's future."

The Harbinger falls far short of the biblical requirements for a message to be seen as from God. The arguments are based on the mishandling of Scripture, faulty theology, misleading statements, the selective use of historical facts and unsupported speculation. Cahn has departed from a biblical hermeneutic in favor of looking for hidden mysteries while in short, he has mishandled the Word of God.

Furthermore, the manipulation of both biblical and historical evidence reveals a sensational "connect-the-dots" approach to understanding and linking the prophetic Word of God and current events. A pattern of both overstating his case and misleading the reader through a very selective use of facts and figures quickly emerges as The Harbinger's foundation.

The Harbinger gives the distinct impression that although Isaiah 9:10 is specifically to Israel, it is not exclusively to Israel and is also connected to America in some way. Although God gave a prophetic word to Israel as a warning of judgment, Cahn also believes that Isaiah's words have become a sign to warn America of impending judgment. However, his distinction between a prophecy and a sign is one of semantics, not substance. That the author sees the harbingers as having prophetic force is evident throughout the book.

Another serious departure from a biblical hermeneutic is the failure to mention the preceding verses in the chapter, which form a critical part of the context of Isaiah 9:10 and represent one of the most important messianic kingdom passages in the entire Old Testament. Isaiah 9:1-7 guarantees national Israel's future—that the kingdom will still be established and that Messiah will rule from the throne of David forever. It is impossible to correctly understand and apply Isaiah 9:10 apart from these verses.

Even though the author denies a belief that America is a new Israel or in covenant with God, the founders of America, whom he invokes, did believe this. The Puritans and Pilgrims believed that the prophecies given to Israel could be applied to the new nation, as well. In their minds, ancient Israel and America were connected.

In chapter 19, "The Mystery Ground," Cahn deepens the impression that the founders were right. One of the main characters has a dream about the dedication of the temple in Jerusalem under King Solomon. Then, in the middle of the dream, King Solomon mysteriously transforms into George Washington. The problems with this plot twist would be difficult to overstate.

The direct prophetic connection between Isaiah 9:10, Israel and the United States could not be more clear as it forms the "factual" basis for the entire story. Cahn presents the "hidden mystery" in Isaiah 9:10 as if those words have been a driving force of events in America through the Isaiah 9:10 Effect.

Arguing for a cause/effect relationship between the words of Isaiah 9:10 and events in America while denying that it is a prophecy about America presents an essentially mystical view and application of Scripture. Once certain things happen or are said, the power of the words of the prophecy takes over, with each subsequent event becoming inevitable no matter when or where they occur. Such a view is characteristic of mysticism, but this is not how biblical prophecy works.

Cahn believes he has discovered an ancient mystery in Isaiah 9:10 hidden in nine signs or harbingers and a pattern of judgment which is repeating in America. Wittingly or unwittingly, the author has created an effective illusion that has mesmerized many because of what they think they see. However, study reveals that what The Harbinger presents as facts and truth does not correspond to reality.

Several crucial elements of the gospel are either missing or not stated clearly enough for it to be understood. The author never mentions "placing one's faith in Christ" or "believing in Christ" or "trusting in Christ" for salvation. In fact, the words believe, faith, and trust never appear in relation to salvation or to the gospel anywhere in The Harbinger.

Furthermore, the deity of Christ is indicated in only one place, but not clearly. Neither does the book make it clear that Jesus died on the cross for our sins. And finally, the resurrection is not to be found anywhere in the book—apart from which there is no gospel.

The Harbinger is a classic case study in precisely how not to handle, how not to interpret, and how not to apply the Word of God. The warning signs are many, and most are in plain view, requiring just a little work to cut through the fog.