Mitt Romney met with Billy Graham and Franklin Graham Thursday in Montreat, N.C. Read below from The Washington Post: 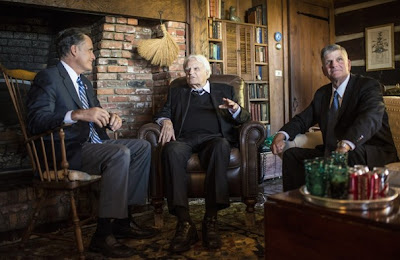 As for analysis, what else is there to say? The Graham family sees Romney as a conservative moral man with an outstanding family. They clearly believe he takes the threat by radical Islam seriously and that's very important to people like Franklin Graham. It's important to point out that Mark DeMoss, who works closely with Franklin Graham, is also an important senior advisor to Mitt Romney.

Billy Graham to Mitt Romney: "I'll do all I can to help you"

Mitt Romney asked the Rev. Billy Graham for his prayers Thursday and the ailing evangelist came through by praying with the Republican presidential candidate and offering his support.

The 30-minute meeting between the world-renowned Christian leader and Romney could provide the former governor with a major boost among evangelical Christians skeptical of supporting the first Mormon nominated for president.

Graham, 93, and Romney prayed at the end of their previously unannounced meeting held at Graham’s estate in Montreat, which is nestled in the Blue Ridge Mountains 18 miles east of Asheville. Graham’s son, Franklin Graham, joined the meeting. It was the first time that Romney had met the elder Graham, but he first met Franklin Graham in 2006.

Graham, who has led religious revivals for more than 50 years around the world—and often during prime-time television specials—has met with every U.S. president since Harry Truman. He was especially close with Dwight D. Eisenhower and Richard M. Nixon, who attended a Graham-led revival in Tennessee in 1970. Most recently, President Obama met with Graham at his Montreat home in 2010.

During Thursday’s meeting, campaign aides said that Graham told Romney that he considered his father, George Romney, a friend. He also recalled that he held his first crusade in Grand Rapids, Michigan in 1947—the same year that the former governor was born.

The meeting was closed to reporters, but photographers and television producers were permitted to record its final moments.

As they entered, Romney appeared to be discussing the death of his father, George Romney.

“He was on the treadmill one morning at age 88 and he’s jogging on the treadmill and his irregular heartbeat caused him to faint and there was no one there to revive him and so he passed away,” Romney told Graham, according to a transcript of the exchange provided by NBC News.

“My mom lived for another year after that, and then she followed him,” Romney added, according to the NBC transcript. “She had a stroke. And she followed him. But dad was active and working on volunteerism to the very end of his life. Every day. Trying to encourage more people to get involved with volunteering here in this country and around the world. He was tireless on the volunteer effort.”

Graham then asked Romney what he could do to help.

“Prayer is the most helpful thing you can do for me,” Romney said. “And what you’re planning, what your son has shown me is going to be very very helpful. And I appreciate that. Its going to be terrific.”

Graham, Franklin Graham and Romney then prayed and as the meeting ended, campaign aides said that Graham told Romney: “I’ll do all I can to help you. And you can quote me on that.”