On October 23, communications in Sudan’s capital of Khartoum were severed and the Yarmouk weapons factory was soon up in flames. The Sudanese regime immediately attributed the explosions to Israeli aircraft and the Israeli government is not confirming or denying its involvement. Sudan is threatening retaliation but the strike is less an attack on Sudan and more of an attack on Iran and Hamas in Sudan. 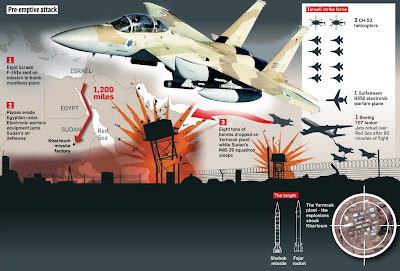 The Iranian Revolutionary Guards has operated a supply line to Hamas through Sudan for years. After the strike, the Sudanese opposition immediately told the world that the Yarmouk factory is run by the Revolutionary Guards. In 2010, an opposition newspaper was shut down and its deputy-editor arrested after it reported that Iran had a weapons factory in Khartoum that was manufacturing arms for Hamas and Iranian proxies in Yemen and Somalia.

The event begs the question of what was being produced or stored at the site that warranted the strike. There are rumors that the factory is related to ballistic missile production. Others recall that the Revolutionary Guards captured dozens of anti-aircraft missiles from Libya and moved them to Sudan, raising the possibility that the Yarmouk site stored them and Hamas was about to receive them.

Another theory is that the attack’s real purpose was to send a signal to Iran about Israel’s long-range capabilities. A top Israeli military analyst noticed that the Israeli aircraft would have had to fly 1,200 miles to the Yarmouk factory and that is about the same distance to the Natanz and Fordo nuclear sites in Iran.

The Israeli government’s lips are sealed but one senior defense official simply said that Sudan is a "dangerous terrorist state," an answer that could be seen as a subtle wink and nod.

Sudan responded to the strike by complaining to the United Nations and its Information Minister said, "Sudan reserves the right to strike back at Israel." About 300 Islamist protesters showed exactly why the strike had to take place by condemning the U.S., chanting "the army of Mohammed is returning" and calling for the destruction of Israel.

In January 2009, Israel bombed an Iranian convoy of 17 trucks in Sudan delivering arms to Hamas. In April 2009, Egypt arrested about 50 Hezbollah operatives planning a terrorist attack on an Israeli target. The network was armed via Sudan and some of the detainees said they were going to send operatives to train there. Another strike occurred in April 2011, reportedly killing a senior Hamas official. There were two strikes in December 2011.

The Sudanese regime, which says it is transforming the country into a full-blown Sharia-based state, may also be helping Iran with its weapons of mass destruction programs. There were reports that Iran, Iraq and North Korea were using Sudan as a WMD repository throughout the 1990s. In 2004, Syrian WMD was evacuated out of Sudan after their existence became public knowledge. Sudan says it will complete its first nuclear reactor by 2020. In 2006, Iranian Supreme Leader Khamenei was in Khartoum when he said that Iran would share its nuclear technology with Islamic countries.

Sudan’s designation as a State Sponsor of Terrorism is well-deserved and on October 23, it was treated as such.