Dramatic Twist: Iran Used up Some of Its Uranium This Summer, Pushing Back "Moment of Truth" 8 to 10 Months

In a startling and very positive new twist to the intense drama unfolding in the Middle East, the prospect for an all-out Israeli-Iranian war now appears to have been pushed back by eight to ten months. Israeli Defense Minister Ehud Barak was interviewed by a British newspaper this week. Barak indicated that while events could change yet again, it would now appear that the likelihood of a major war with Iran before next fall has been significantly reduced. 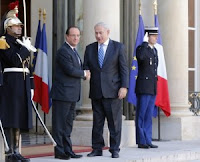 Prime Minister Netanyahu is currently in France. He told the Paris-Match that an Israeli first strike on Iran would be welcomed by the Arab world, which fears the Persians getting the Bomb. Still, he, too, is telling French President Francois Hollande and senior officials in Paris that war isn’t imminent and is asking them to press forward with even tougher economic sanctions on Iran.

This is a welcome relief and a huge answer to prayer. With the prospect of war seeming imminent just a few weeks ago—for reasons I explain in the new ebook, Israel at War: Inside the Nuclear Showdown with Iran—Christians all over the world have been praying for peace, according to Psalm 122:6, which commands believers to "pray for the peace of Jerusalem."

Iran’s decision to step back from the brink of building the Bomb has, for now, relieved tensions with the Obama administration. It has enabled Netanyahu to feel comfortable to call for new Israeli national elections in February. It is encouraging Jewish and Christian tourists to continue visiting Israel. Indeed, The Joshua Fund tour of Israel and 2013 Epicenter Conference remains on track for next June. Please get details here and sign up to join us. We would be honored to have you with us.

What I find intriguing is that Barak indicates that war was increasingly likely this fall. The Israelis were preparing to hit Iran before the U.S. elections. But by the grace of God, something happened in Iran that unexpectedly changed the dynamic.

Here’s the Story as We Know It So Far:

"Iran temporarily pulled back from its nuclear weapons drive this summer, and converted over a third of its enriched uranium to civilian use, Defense Minister Ehud Barak said in an interview published Tuesday, intimating that this shift pushed off a decision by Israel and its allies about striking at Iran’s nuclear facilities," reports the Times of Israel.

"Barak told The Telegraph that Tehran’s move to transfer 38 percent of its enriched uranium stockpile into fuel rods for civilian use 'allows contemplating delaying the moment of truth by eight to 10 months.' Were it not for this Iranian move, he said, the situation would likely have 'peaked' before the US presidential election.

Talk of an Israeli or American strike against Iran’s nuclear program has indeed died down since being raised to a zenith over the summer, with the US publicly opposing an Israeli resort to force and refusing Israel’s call to set 'red lines' that, if crossed by Iran, would trigger military action. The US maintains that time remains for diplomacy and sanctions to work, while Israel at the time said Iran was closing in fast on the ability to create a nuclear weapon.

Asked whether, had they not made the move to reduce their uranium stockpile, the Iranians would likely be reaching the point of no return, necessitating military action 'about now,' Barak replied: 'Probably, yes.' He added that Iran could still reconvert the rods back into weapons-grade uranium, though this would take time and resources."

"There could be at least three explanations," Barak told The Telegraph.

Mr Barak added: "Maybe it’s a combination of all these three elements. I cannot tell you for sure."