America: No Jews in Judea and Samaria

The Obama Administration on Tuesday reiterated its position that Jews must not be allowed to build and live on their ancient biblical heartland for the sake of peace in the region. 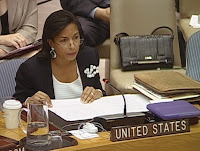 Rice: US Does Not Accept Legitimacy of Settlements

Speaking before the UN Security Council, US Ambassador Susan Rice stated that the White House "does not accept the legitimacy of Israeli settlement activity [sic], and will continue to oppose any efforts to legalize [Jewish] outposts."

Though technically the territories of Judea and Samaria are disputed, the US and other Western powers set no such limits on the Arab population's rampant construction.

Rice went on to suggest that the Jewish presence in Judea and Samaria, which the world calls "the West Bank," is a detriment to the international community's plan to solve the conflict by birthing a Palestinian Arab state.

Some Israelis are concerned that an Obama win in the upcoming US presidential election will result in significantly increased pressure on Israel to meet Arab demands.

Many of the same Israelis have been urging Prime Minister Benjamin Netanyahu to quickly adopt a legal study that he commissioned that justifies the Jewish presence in Judea and Samaria.

"After years in which, unfortunately, a question mark hovered over the question of the right of the state of Israel to settle in Judea and Samaria, a panel of senior jurists...determined that Israelis have a legal right to settle [there]," Erdan was quoted as saying by Israel National News. "Let us not leave this report in the desk drawer."

Erdan was referring to the Levy Committee that Netanyahu himself established to look into the legality of Jewish settlement in Judea and Samaria under international law.

The committee was comprised of three senior Israeli jurists, including an international law expert who was party to the formulation of the "Oslo Accords."

The committee made public its findings early in July, noting that the standard accusation that Israel is militarily occupying Judea and Samaria is inaccurate under international law.

"Our basic conclusion is that from the point of view of international law, the classical laws of 'occupation' as set out in the relevant international conventions cannot be considered applicable to the unique and sui generis historic and legal circumstances of Israel's presence in Judea and Samaria, over the course of decades," the judges wrote.

In other words, the Geneva Conventions define "military occupation" as the seizing of another nation's land, and the fact is that no nation legally controlled Judea and Samaria following the fall of the Ottoman Empire, which itself had ruled the area for over five centuries.

Additionally, the Jews cannot be considered an outside force in Judea and Samaria, but rather the historic founders of the territory as a unified nation-state. Jewish archeological finds dating back millennia abound in the "West Bank."

The committee based its findings on "international, Jordanian, Israeli and even Ottoman laws," all of which led to one inescapable truth: "Israelis have the legal right to settle in Judea and Samaria and the establishment of settlements cannot, in and of itself, be considered to be illegal."